From Red Racer Brewing (Central City Brewers & Distillers) out of Surrey BC comes the  “Spiced Pumpkin Ale” a fall seasonal brew.  The beer pours a deep amber colour with a beige head.  The aroma of the beer is of Pumpkin, spices, cinnamon, cloves, malts.  The flavour of the beer is of malts with cinnamon, ginger, cloves, earth, caramel and pumpkin.  This is a very well-balanced beer that is not to sweet but not to tart either.  The beer comes in at an alcohol content of 5%. With pumpkin beers this is one of the staples every year.  If you like the style then make sure to pick up this one! 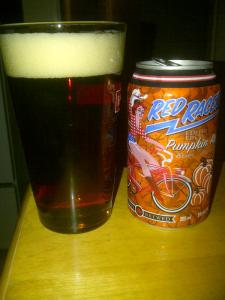