From Salt Lake City Utah…. yes you saw that right I said Utah comes the “Hop Rising Double India Pale Ale” brewed by Squatters Pubs & Beers.  The beer pours a coppery orange with an off white head (warning when I cracked this beer it foamed like crazy).  The aroma consists of alcohol, sweet fruits, hops and malts.  The flavour is of sweet fruity citrus, caramel, hops bitterness, malts, pine, resin and a mild alcohol finish.  The alcohol content of this beer is 9% while the IBU comes in at 75.  Beer on tap in Utah can only be 4% by volume or 3.2% by weight by law

so this beer is only available in bottles even at the brewery and pub.  I would have to say this is a very well constructed Imperial IPA and I wish I got more than one bottle while in Oregon as that is as North as this beer gets.

Commercial Description:  Big hop, big malt, big beer. One of the most aggressive beers ever released in Utah, Hop Rising a double India Pale Ale, clocks in at 75 IBU’s and 9% alcohol. We use three different malts to create enough flavor to perfectly balance three varieties of hops, then, because we can’t help ourselves, we dry-hop it; resulting in an amazing two pounds of hops per barrel! The combination of robust malty flavors and huge hop bitterness provide a well-balanced beer; a hop lover’s dream. 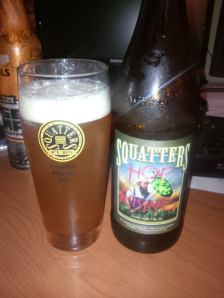