On May 28th, 2014 a new Collaboration Ale was launched in Vancouver.  The beer is named “I-5 Amarillo Ale” and is a collaboration between Central City Brewers & Distillers (Surrey), Elysian Brewing Company (Seattle) and Joey Restaurants  (Canada, USA).

The beer is a Single Hop (Amarillo Hops) Northwest Style Pale Ale and will be available on tap at Joeys Restaurants across North America  exclusively as well as in 650ml bombers in select liquor stores in British Columbia.  All beer poured in BC will be Brewed out of Central City Brewers & Distillers while all US batches will be brewed out of Elysian Brewing.  Some heavy hitters were at the launch event including Gary Lohin brewmaster for Central City as well as Dick Cantwell Brewmaster and founder of Elysian Brewing and the brewer for Elysian Capitol Hill.  Both breweries brought samples of their beer with Central City’s batch on tap for all to try as well as a few growlers of the Elysian batch to be shared around. 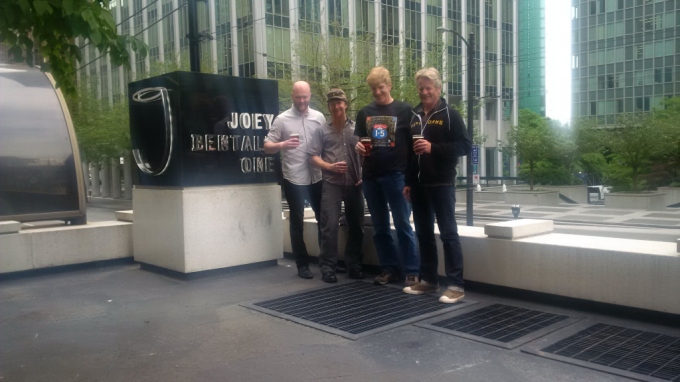 Both versions were similar with slight variations on the hops bitterness and slight differences in the malts.  The malts will always be slightly different as the breweries just don’t have access to the same malts.  The hops will be brought in line with each other in subsequent batches though.  What I can say though is that this is a very easy drinking Pale Ale with a great choice of hops for a single hop beer.  I will have a few of these bottles in my fridge and I will make sure to have a glass or three when I head out to a Joeys Restaurant.

VANCOUVER, BC—(May 27, 2014) – JOEY Restaurants announces partnership with Central City Brewers & Distillers and Elysian Brewery to launch a cross border collaboration beer.  The beer is a Pale Ale and is appropriately named the “I-5 Amarillo Ale”, which is a nod to the Interstate 5 highway that connects Seattle to the BC border, as well as to the generous use of Amarillo hops in the beer.

Central City Brewers & Distillers is based in Surrey, British Columbia while Elysian Brewery is from Seattle, Washington. JOEY restaurants has restaurants in both BC and in Washington state, and saw an opportunity to bring together two of their great supplier partners from each of the regions to do a unique Collaboration brew.

“We are glad we could help bring these two breweries together for this special beer,” says Geoff Boyd, VP of Bar and Concept Development at JOEY. “We love working with our supplier partners, and the I-5 Amarillo Ale just illustrates the possibilities that exist when we collaborate together with them to come up with something different.”

The 5% abv and 32 IBU beer is described as “a luscious Pale Ale with lots of citrus and tropical fruit notes in the flavour and aroma,” says Central City Brewmaster Gary Lohin. “Dick and I have known each other for a long time and have a deep mutual respect.  This was a fun opportunity to do a unique beer together in collaboration with JOEY Restaurants.”

“We are really excited about this beer,” says Dick Cantwell, Founder of Elysian Brewery, “everything from the beer itself to the label embodies a true partnership.”

The label has a retro feel and was intricately designed to feature elements of both Canada and the USA. There are subtle tributes to national symbols like the goose and eagle and features sayings that speak to the collaboration of “brewers without borders”.

The I-5 Amarillo Ale will be available starting May 28th exclusively at JOEY Restaurants with 650ml bottles released soon after in select liquor stores in British Columbia.

JOEY Restaurant Group has been leading the way in casual fine dining since 1992 with 28 locations across Canada and Seattle, Washington. Led by Chef Chris Mills – who has competed on Iron Chef Japan, placed fifth in the world at the Bocuse d’Or, and has cooked for the prestigious James Beard Foundation— JOEY focuses on fresh, quality ingredients. JOEY’s unique approach to investing in their staff has made them one of the “Best Places to Work in Canada”. They offer an array of training, coaching and scholarship programs in culinary and business management with a partnership with Royal Roads University.

Central City Brewers + Distillers (CCBD) is a microbrewery in the business of developing, producing and selling international award-winning premium craft beer and high quality distilled spirits brewed without compromise. Based in Surrey, British Columbia, CCBD was voted Canada’s Best Brewery of the Year in 2010 and 2012. Its Red Racer brand has become a cult icon among craft beer enthusiasts throughout North America. Founded in 2003 as a brewpub and liquor store in downtown Surrey, CCBD celebrated its 10th anniversary in 2013 with the grand opening of a brand new, 68,000 sq. ft. brewery and distillery on Bridgeview Drive. www.centralcitybrewing.com

Known for variety and innovation, Elysian Brewing Company has brewed thousands of batches and well over 350 unique recipes since opening their doors in Seattle’s Capitol Hill neighborhood in 1996.

In addition to brewing world-class examples of classic beer styles, Elysian is extremely well known for creativity in brewing ingredients. Beyond elderflowers, peppercorns, yuzu and jasmine, Elysian is most revered for their ridiculous expertise with Pumpkin Beers. Every October they host the Great Pumpkin Beer Festival featuring well over 60 different pumpkin beers from near and afar – generally including at least 15 from the Elysian’s crazy brew team and some fun collaborations.