Beacon Brewing (Now known as Torchlight Brewing) is a nano brewery located in Nelson BC in the Kootenays.  Sadly they will not be known as Beacon Brewing much longer as there are some legal issues with the name and they are working out a new name.  At least only the name is an issue though as the beer is great! 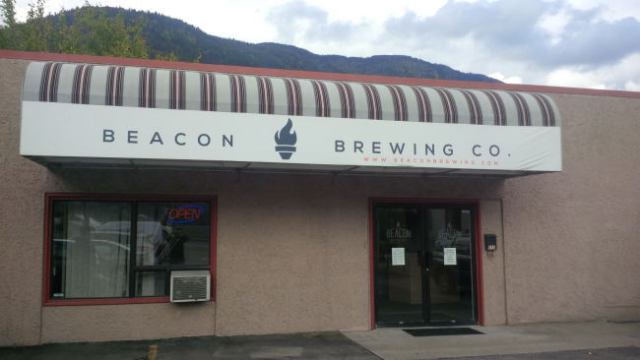 Opening in June Beacon Brewing is one of the newest Nano Breweries in BC.  In a town of only two breweries they are doing some great business.  When you walk into the tasting room you will find a small room with some swag.  You will also find growlers for purchase and filling.  I really liked the touch behind the bar with their beer artwork done in chalk.  Many breweries outside of Vancouver only fill beer off of the tap but Beacon is filling with Blichmann Beerguns.  This means that the growler is filled with CO2 before it is filled with beer extending the life of the beer from a day or two to a few weeks.  This is great as you can then bring their beer back to Vancouver and possibly share it with friends.

Once I had tried a few samples and filled two growlers and a 1L growler I headed to the back to take a tour of the brewery.  When I arrived in the brewhouse I was greeted by an old looking and very small brewhouse.  Behind the brewhouse you find the small cooler where they chill their beer.  Next we headed into the fermentation room.  This was my very first experience with this style of fermentor.  Beacon Brewing is using not only plastic fermentors but also using an unchilled room.  When they need to change the temperature of the beer or control the temperate in any way they can lift the fermentors and move them into their cooler.  If I had not had their beer before seeing this way of fermenting beer I would have sworn that it would effect the flavour.  Luckily the beer is pretty darn tasty and my confusion was unfounded.

This is an unconventional brewery brewing up some great beer.  I look forward to my next chance to head back to Nelson and try out more of their beer especially the IPA I have heard of.  The new name of the brewery has been announced and they have released the new logo as well.  The brewery will soon be known as Torchlight Brewing Company.