I just got home from a long road trip that headed as far North as Prince George.  The first stop on the trip was Valemount a short 675km from Vancouver (and we drove from Squamish 737km).  Not only was Valemount a great way point for a road trip but it also houses the brewery Three Ranges Brewing.

Three Ranges Brewing is not open on Mondays but still opened the brewery up to give me a tour of the facility. The tasting room is beautiful with wood finishes everywhere.  For such a small town Village like Valmount the brewery has lots of seating and around 6 taps of beer.  Sadly when I was in town they had temporarily shut down beer production for maintenance and were using the shutdown to reorganize the brewery. Fortunately for the locals it gave them a chance to have a tap takeover and showcase the breweries friends. 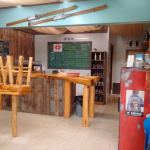 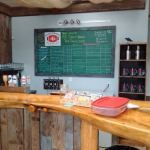 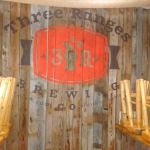 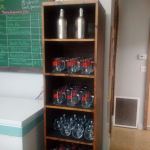 Once finished looking around the tasting room I was brought into the brewery.  Currently the brewery was in a bit of disarray as they were just finishing up moving tanks and starting to brew again.  They have moved equipment around to new locations and are working on bringing in new equipment also. 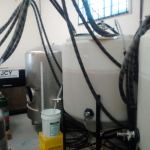 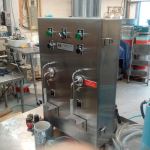 Here are a few more photos I took including the Valmount sign and two more of the brewery.

If you are looking for Three Ranges Brewing’s beer you will have to take a drive unless you live in Valemount, Prince George, Clearwater and McBride according their website.  It is well worth the drive though and I was happy I found a few 6 packs while driving through Price George.