Abbotsford is moving ever closer to having a new brewery.  This time though the brewery will be located out in the Eastern region of Abbotsford off of the Sumas exit of Highway 1 and will be called Field House Brewing Co.

The brewery is located in an old building off of Railway Ave that I would have to assume was originally an auto shop or something. 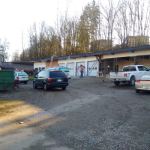 Through the left most door you will find the tasting room.  The walls have a nice wood ship lap finish and there will be a nice big wood burning fireplace on the back wall.  There will be a few long tables and some smaller tables all with wood tops.  The bar will be located on the right hand side of the second photo where you can just barley see where the taps are plumbed in.  There will be a lounge license here at some point if not from the opening.  As well as the tasting room there will also be a large pick-nick area outside the tasting lounge.

To the right of the tasting lounge down a hallway you will find a second room that houses the cooler and will house the brew house.  The cooler has been increasing in size over time and has shrunk the area for the brew house but you need enough space to keep the finished product cold.  The 15BBL (or 17.6 hectoliters roughly) brew house will be tightly squeezed between the cooler and the opposite wall. 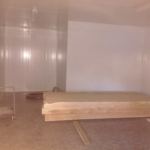 Heading further right in the building you will find their mechanical room.  Beyond that is the tank farm.  There will be 6 15BBL fermentors as well as one 15BBL bright tank and a 30BBL bright tank.  The whole tank farm and brew house should be showing up soon and they hope to have beer in them as soon as possible.

The brewery has been brewing on their test batch system already and dialing in their recipes.  They are looking to have construction finished mid December and be open to the public right away.  For the opening they will likely be only selling small samples of beer with no growler fills as they will not have much beer ready at that point.  I really like how this brewery is coming together and I look forward to trying their beer when they are opened.