From Ipswich Massachusetts Clown Shoes Beer (contract brewed currently by Mercury Brewing Company) comes their limited release the “Fight of the Angry Beast”. The beer is a blend of 1/3 Undead Party Crasher aged in bourbon barrels, 1/3 Blaecorn Unidgragon aged in scotch barrels and 1/3 Billionaire aged in scotch barrels. The beer pours an opaque black with a lighter brown head. The aroma consists of Bourbon, roasted malts, chocolate and maybe anise. The flavour is of chocolate, vanilla, roasted malts, Bourbon, toffee, dark fruits, earth and bitterness. There is an alcohol burn for sure as would be expected. This beer starts with a definite Imperial Stout base but as it warms up it takes more and more like a barley wine. The alcohol content comes in at 10.75%. This is one of the most interesting beers I have ever had. I would but tons of this beer if I could afford to but sadly it is fairly expensive. This is a serious hit!

Commercial Description:  Available October 2015.  For the fourth installment in our “Beast” series, Sir Walter Scott has finally tamed the creature, who was about to attack a group of innocent unicorns. To celebrate, we blended 1/3 Undead Party Crasher aged in bourbon barrels, 1/3 Blaecorn Unidgragon aged in scotch barrels and 1/3 Billionaire aged in scotch barrels. Hooray! 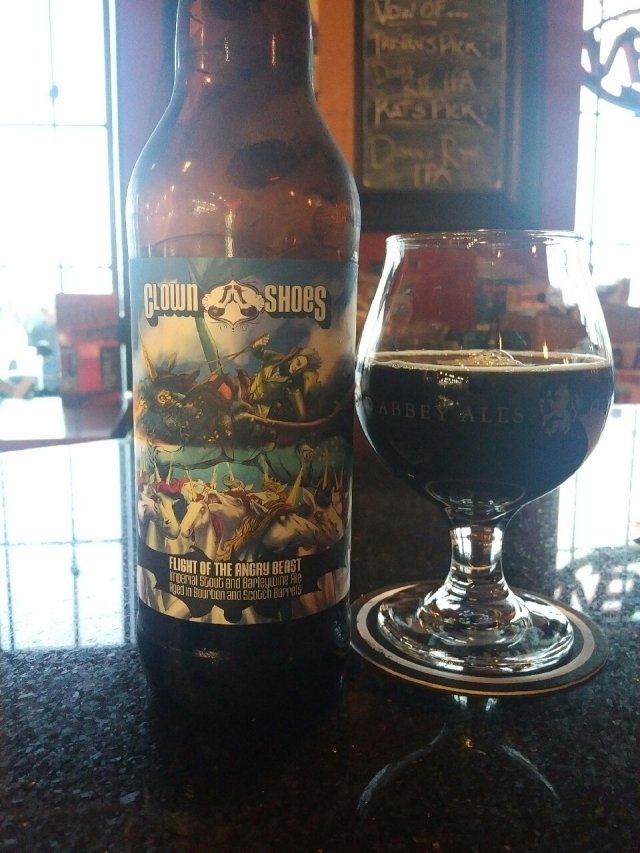 2 comments on “Flight of the Angry Beast – Clown Shoes Beer”