From Bomber Brewing in East Vancouver comes their “Russian Imperial Stout”.  The beer pours a deep opaque black with a brown head.  The aroma consists of quite roasty malts, ash, chocolate, brown sugar and bitterness.  The flavour is of earth, chocolate, molasses, ash, burnt coffee, roasted malts, mild brown sugar, dark fruit and bitterness.  The alcohol content comes in at 9.5% with an IBU of 62.  Let this beer warm up as much more flavour builds.  This Russian Imperial Stout is much roastier than many in the style but the flavour is quite good and well worth picking up a few tall cans at minimum.

Commercial Description:  BOMBER DITCHES THE BOTTLE FOR ITS NEW IMPERIAL STOUT.  RUSSIAN IMPERIAL STOUT: Originally brewed to impress Czars, Russian
Imperial Stouts needed to be high in alcohol to prevent freezing on the long
journey to the Russian courts. Brewed with 14 different malts to create a
complex, deceptively drinkable, giant of a beer, Bomber RIS is packaged in 473ml
cans making it the most portable of Russian Imperial Stouts. Trip to the old
country not necessary. 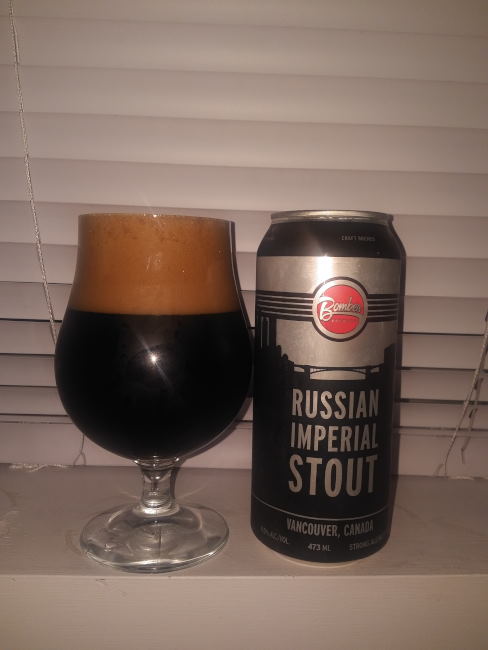