Vine & Hops Wine and Craft Beer Tours does both public and private beer and wine tours in Metro Vancouver and the Fraser Valley.  The beer tours include pick up in Downtown Vancouver, transport to and from 3 breweries, all tasting fees, snacks and trivia.  On Friday April 1st a group of bloggers including myself got to head out on one of their tours.

This tour was comprised of 4 breweries as they had the ability to check out two as of yet unopened breweries locally.

We started the day out at R&B Brewing in the Olympic Village of Vancouver.  R&B Brewing has built a brand new food primary restaurant attached to the brewery (Yes it is children friendly).  It has not yet opened but we were given a sneak peek at what it looked like.  Just a hint it looked epic!  Started in the food primary.

The room feels like it could be anyone’s basement full of interesting gadgets and mixed wares.  They have will have a fairly large tap list of their beers plus a few other options for non beer drinkers.  They will have hot food that includes pizza among other things.  They also have a super cool retro real to real music player (actually 2) with two walls of speakers that are active that put out the music.  The last 3 photos are of the separate growler station that is nearest the front doors.  After the new room we headed into the brewery itself for a look at where the beer is made.

The first 3 photos are of their large cold room.  We then moved into the brewery for a quick peek.  We had taken to long in the restaurant side because of our excitement of the new space so we did not get as long a look at the brewery.

Once done at R&B Brewing we headed to South Vancouver to check out Dogwood Brewing.  I forgot to take a photo of the front of the brewery so I will use an oldy.

We started and finished the tour in the tasting room trying out samples of the beer as well as getting to try some of Dogwood Brewing’s pizza that they offer for sale.

The lounge is well laid out with lots of seats at long tables.  Its a good way to get to know people.  The beers we tasted were explained by Claire the owner and brew master.  All beer that Claire makes are certified organic and come from British Columbia.  This is the first Organic brewery in Vancouver.  After sampling beer and before trying out the pizza we headed into the brewery for a tour of the production space.

Claire is very knowledgeable about brewing beer and she showed us as she even taught our group the odd thing on our tour and we were all beer bloggers.  The size of the brewery space is only possible because it is located in South Vancouver with lower lease costs.  This also means Dogwood can grow quite a bit!  Once we finished up our last samples and the pizza we moved onto our next brewery.

Fuggles & Warlock Craftworks is just waiting for the last paperwork from the province to open up their lounge in Richmond.

There is no doubt in my mind that Fuggles & Warlock Craftworks is going to be the must hang out lounge in BC once they open to the public.  The space in fantastic with one side being a more subdued sit down lounge with the other side having two arcade systems with tons of games to play all for free!  They also have the bar area where you can sit and watch them pour beer from their Lightsaber tap handles.  The finishings are all wood a nice BC touch.  Once we had tried some beer we moved into the brewery itself.

The brewery is still pretty small with only 6 large fermentors but this will change quickly with their beer being available in more Provinces all the time and in Asia also.  They both can and bottle their beer.  Their standard beers will be available in 6 pack cans with bombers for their limited releases.  Their cooler is larger than some BC breweries all by itself.  This group has everything going for them.  Geeky marketing and a wicked space.  Watch out BC and Canada as they are coming for you.

Back on the road again we headed under the tunnel to Four Winds Brewing.  Again I forgot to take a photo of the front of the brewery so I will use an old photo. 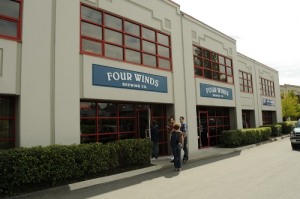 Four Winds Brewing is one of the most respected Canadian breweries and for good reason.  This brewery makes some amazing beers!  We started in the tasting room as usual.  If you don’t frequent Delta you may not have been to the tasting room since the expansion.  The room is great with tons of room to enjoy your samples.  Sadly they do not yet have their lounge license from my understanding but they are working on getting it.

After checking out the tasting room we moved into the brewery where the magic happens.  The brewery is amazingly packed with tanks.  They have almost zero room for expansion but that is not stopping them as they have more capacity coming soon (Who knows where though).  They even do their packaging on a mobile machine that fits between the fermentors.

The most amazing part about our stop at Four Winds Brewing though was their tacos.  They only serve them at lunch currently but these are amazing authentic style tacos!  They serve both meat and veggie versions and all are amazing!!!!   Why not finish the post off with some photos from Vine & Hops themselves.

All five photos above are from Vine & Hops.

I really want to than Vine & Hops for setting up this tour for us bloggers.  We had a great time and I am sure that your group would have just as much fun as we did be it Craft Beer or Wine!  Check out their website for more information.