From Tree Brewing in Kelowna BC comes the “Captivator DoppleBock” a seasonal release.  The beer pours a deep reddish brown colour with a tan head.  The aroma consists of malts, toffee, caramel and sweetness.  The flavour is of toffee, caramel, earth, mild bitterness, sweetness, coffee, chocolate and a hint of roasted malts.   The alcohol content comes in at 8% with an IBU of 37.  This is a refreshing although sweet beer and would probably go down well in the summer even with the high alcohol content.

Commercial Description:  Doppelbock, which literally means “double bock”, is known to be one of Germany’s biggest beers because of its higher alcohol content, ranging between 7-13% and is exceptionally malty with very little bitterness. Our Captivator DoppelBock is 8% alc./vol.  Doppelbock emerged in the late eighteenth century as a powerful lager variant of the old monastic strong beer, the monks’ “liquid bread,” which they traditionally brewed for the Lenten season. The monks would be forced to fast several times a year with the longest being during Lent, 46 days between Ash Wednesday and Easter Sunday.
Where did Bock get it’s name? The style known now as bock was a dark, malty, lightly hopped ale first brewed in the 14th century by German brewers in the town of Einbeck. The style was later adopted by Munich brewers in the 17th century and adapted to the new lager style of brewing. Due to their Bavarian accent, citizens of Munich pronounced “Einbeck” as “ein Bock” (“a billy goat”), and thus the beer became known as “bock”. To this day, as a visual pun, a goat often appears on bock labels.

Check out my original review from 2012 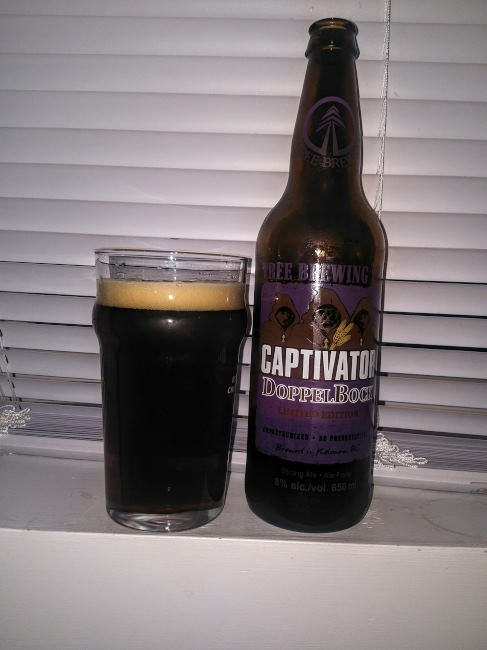