Chilliwack will finally be a two brewery town this spring/summer.  Chaos & Solace Craft Brewing Company is building out their space and looking forward to serving Chilliwack residence.  Located right in downtown Chilliwack they look to help redefine what the downtown core is and be part of the revitalization. 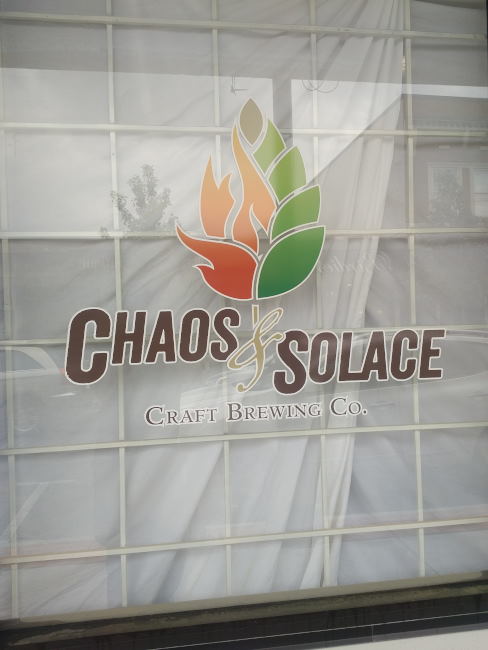 This brewery is not looking to have wide distribution as they want to be as local as possible (at least in the beginning).  They hope to use as much local ingredients also from the hops to malts.  They want to both be sustainable and help build up the local economy as well as build up a sense of community in Chilliwack.  The brewery is being built by the former co-owner of Old Yale Brewing Gord Gagne as well as the head brewer Calvin Quaite without investors so this truly their baby.

The tasting room has a great feel with lots of wood that can contrast with the really old brick walls.  The wood for the bar is actually reclaimed wood from the original walls that covered up the block walls.  The building has a lot of history and it is great to see these old buildings saved and repurposed like this.  This building used to be home to the most high tech Safeway in 1950 although they felt they outgrew the building in around 11 years if I remember correctly.  It changed tenants for many years but has sat empty for some years recently.  Calvin had looked at the space a few years ago when he originally started thinking about opening a brewery.  The brewery name (Chaos & Solace Craft Brewing) comes from the fact you can take Solace in the fact that they will have core brands that you can expect to drink all year such as their beers the plan to launch  with “Luckakuck Kolsch, Paramount Porter, Lakeside Hefe-Weise, west coast ipa” all beers that take their names from the Chilliwack area (or will when the IPA is named).  But their will be some Chaos in their one offs and seasonals that will keep you wanting to come back for more.

To keep with the whole history lesson the brew system steps up to the plate.  The system has been sitting for many years in crates in storage.  The former owner of the tanks lost them when he did not pay property tax and they were auctioned off.  Luckily for this brewery they heard about it an won the bidding and it has sat in storage again for a long time until they could move it into their space.  The system was built by the now defunct Northern Brew Systems from BC (Vancouver Island if I remember correctly) in the early 90’s for Kona Brewing in Hawaii.  The brewhouse is a 17Hec (15bbl) system.  The system was used at their original location until they decided to upgrade and moved it to their second location in Hawaii if I remember correctly.  But at both locations it was not there for to many years.  After Kona Brewing it was sold to anouther brewery that started up in the State of Hawaii Big Wave Brewing although they did not last for too many years.  The brewhouse then spent over a decade  locked up in boxes back on Vancouver Island before it was released from its purgatory.

I was able to try three of the test batch beers that Calvin has created and they were all quite tasty.  The beers I was able to try out were the Luckakuck Kolsch, Paramount Porter, Lakeside Hefe-Weise and all hit the spot.

Both guys are working hard to get this brewery open as fast as possible and I look forward to seeing what they can do with this amazing looking space.  Watch out Chilliwack as Chaos and Solace aim to build an new sense of Chilliwack pride and community when they open to the public.