You may have noticed an upswing of Alberta beer reviews on the blog lately.  This is because my job has been taking me to Edmonton quite a bit lately.  On the latest trip to the province I was able to stop in to Alley Kat Brewing to get a tour of the facility and get to know some of their staff.  If you are in Edmonton on a Thursday or Friday they do free tours between 12 and 5 currently. The location does not scream brewery on the outside as their sign is pretty small but don’t skip a visit if only to pick up some beer. 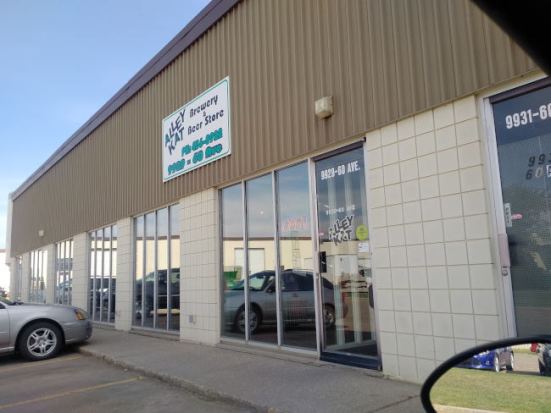 Because you always start in the tasting room I will start there.  The space is large with lots of room to move around.  They sell their growlers (and fills obviously), swag and bottles of beer at the tasting room.  Unfortunately you are not able to sit down to a glass of beer as their license does not currently allow it but you can taste samples of all the beer they have for growler fills.  I really hope this changes though as I really think this could be a great community hub.  Just look at East Vancouver which sits in similar commercial zoning and works amazingly well!

When you head into the back you start out in the original space the brewery began in.  Alley Kat has been expanding both ways in the building over the years but the brew house itself is still in the same location.  The brew house is front and center and behind it you find a bunch of fermentors and bright tanks including their latest two BB8 and BB9 (Yes its BB8 so they have pasted a picture of BB8 to it lol).  Above the brew house on top of the office area they used to house all of their grains but now it only houses their specialty malts as they have a silo outside.

To the left of the unit that houses the brew house you will find anouther unit that houses more fermentors.  They also had their beast of a filter that takes two hours to put together and take about.  Alley Kat Brewing only ships their beer in Alberta but they are working to get it into more bars and liquor stores and have been working to put more fermentors into this space.  Luckily for them there is tones of room in this bay for more tanks.

Anouther bay houses their bottling line.  Its an old line but works well with very few issues with low fills.  They do have a fun bottle that sits in the finished tray that is used as their low fill indicator bottle.

Moving along to anouther bay you will find lots of empty bottles and some packaged product that is about to be sent out via truck to liquor stores and pubs.  There is also their test batch system found here that is responsible for their Dragon Series of Double IPA’s.  It is also where the brewers get to play and test out new recipes for the brewery.

Last but not least I was shown into their Cooler.  This is where they house all of their finished product that they are waiting to ship out.

If you alive in Alberta or find yourself in the province make sure to check out Alley Kat Brewing or at least pick up some of their beer.  If you try no other beer try something from their Dragon Series of Double IPA’s as it is probably their best beers they make.

Thanks to the ladies at Alley Kat Brewing for being so welcoming and helpful while I was at the brewery!