Coast Mountain Brewing up in Whistler has gone through a few name changes since its first conception and things had been progressing slowly but that has changed now.

A few days ago Owner and Head Brewer Kevin Winter gave me a tour of the under construction space.

When you walk through the doors you will find yourself in the tasting room.  The first photo shows the bar.  They plan to have 8 of their beers on tap as well as two wine taps.  The bar will have seating for a few people.  To the left of the bar will be an upright cooler for packaged products.  The second photo is the middle of the tasting room.  There will be a long table running right down the middle from the foreground to background.  The very back will house two bathrooms.  Just in front of those bathrooms will be a fireplace.  The last photo is of the window that opens into the brewery itself.  Along the bottom of the window will be a high top table with bar seating.  The tasting room will be finished with lots of wood to give it the feeling of a cabin something that will really fit in in Whistler.

To the right of the window in the tasting room you will find the door into the brewery itself.  Just inside the door and what will be seen from the window above will be the brewhouse to the right of photo one with two fermentors stacked on the far right side of the photo.  Photo two looks back at the tasting room.  Just in front of the window will be where the barrel program will sit.  The third photo is taken from the back of the brewery looking toward the front and shows where all of the remaining fermentors and the two bright tanks will be located.  To the side of the tank farm you will find the walk in cooler.  The last photo is of the area just behind the walk in cooler and depicts the grain storage area.

The Brew system is made by Simplified Stainless Systems a new company that split off of Specific Mechanical Systems on Vancouver Island.  This system is their first system and will act as a showcase of what they can do!  With the brewhouse landing in a week or two things should get moving very quickly. 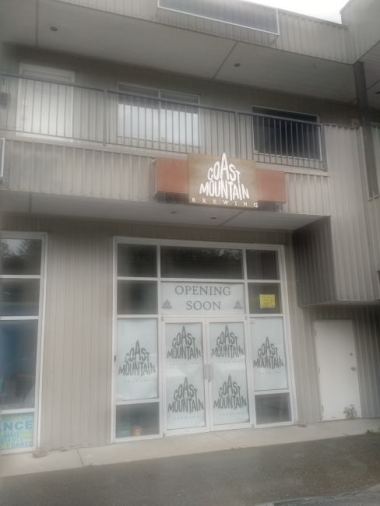 One comment on “Coast Mountain Brewing (Under Construction) – Whistler”