From the Mad Scientist of beer in British Columbia James of Storm Brewing comes their “Glacial Mammoth Extinction” a beer released on December 5th, 2015 after being aged for 2 years in Oak Barrels.  I aged my bottle for a year until late November 2016.  The beer pours a very deep brown without head.  The aroma consists of toffee, caramel, treacle, sweetness and alcohol.  The flavour is of treacle, toffee, caramel, syrup, port wine, dark fruit, cherries, berries, oak with some mild tartness to accentuate the alcohol burn in this beer.  The alcohol content comes in at 25% alcohol.  While this beer is very extreme in every way it is also very enjoyable by the ounce or two.  Any more than that would just be crazy as it is a freeze distilled spirit! I am so happy that I was able to pick some of this up last year and I am glad I have quite a bit left to sip slowly.

Commercial Description:  The Glacial Mammoth Extinction is the first beer of it’s kind, and the result of freezing a strong sour beer to -30C in two stages over a one month period.  The sweet alcoholic liquid was separated from the extinct ice glacier that was left in the tank, and then aged in French oak barrels for two years until it was ready.  The final product is a rich, complex, and viscous 100% malt beverage that resembles Port more than beer.  Residual sugar: 80 grams per litre Volume produced: 400 litres.

This was the beer dubbed the most expensive beer in Canada as they had special hand blown 1L growlers made that had a Mammoth Tusk pendent that went for $1000. Read about it here.

Here is my review of this beer when it first surfaced.

When the beer was released on December 5th, 2015 I was there to pick up my beer as were many others.  I was able to view the $1000 bottle in person.  Here are my photos from that launch! 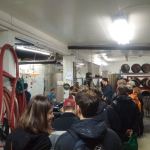 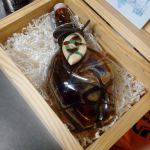 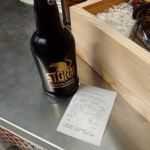