From Twin Sails Brewing in Port Moody comes their “Imperial Stout Aged in Bourbon Barrels” a beer aged for one year in Bourbon Barrels for their second anniversary.  This was bottle 309 of 468.  The beer poured an opaque black with a brown head.  The aroma consists of vanilla, bourbon, roasted malts, toffee, brown sugar, chocolate, anise with a sweet finish.  The flavour was of vanilla, bourbon, oak, anise, chocolate, toffee, espresso, roasted malts, brown sugar, coconut and very little bitterness.  The alcohol content is a cool 11.6% that is partially masked by the flavour of this beer.

Commercial Description:  Aged in select bourbon barrels since September 2016, this dense, inky imperial stout has big aromas of fudge, vanilla and espresso.  The palate brings an intense mix of chocolate, char, and coconut and a thick luscious mouth feel that leads into a warming, rich finish.  An intentionally low carbonation brings an exceptional spirit-like character to the beer. 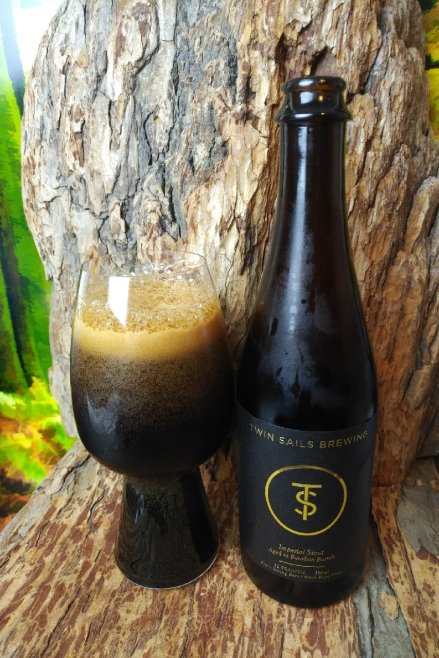 From Port Moody’s The Parkside Brewery comes their “Tropical Milkshake ISA” their Anniversary beer.  The beer pours a murky orange colour with a white head.  The aroma consists of tropical fruits, juicy hops, lactose and floral hops.  The flavour is of tropical fruits, juicy, lactose, resin, earth, dank hops and some bitterness.  The alcohol content comes in at 4.6% with an IBU of 40.  More dank and bitter than your average Milkshake IPA but I quite enjoyed it.

Coming out of New York’s Shmaltz Brewing Company comes their “He’Brew Jewbelation Reborn (17)” an American Strong Ale. The beer bast brewed in 2013 and I purchased it in January 2014 and cellared until May 2016. The beer was brewed for the breweries 17th Anniversary and the first year they had their own brewery (No longer contract brewing).  The beer pours a deep brown with a ruby tinge and a brown head. The aroma consists of dark fruits, chocolate, roasted malts, molasses, toffee, coffee and sweetness.  The flavour is of dark fruits, chocolate, coffee, brown sugar, molasses, toffee, roasted malts, ash, sweetness and alcohol.  The beer used 17 malts, 17 hops and comes in at 17% Alcohol. With just over two years of cellaring this beer is surprisingly smooth for the alcohol content! It is also quite enjoyable on to of being smooth for the ABV.

Commercial Description:  How could we hope to top last year’s Jewbelation Sweet 16 with its cupcakes, unicorns, & Satan’s Ferrari birthday cake? massive challenge. So for Year 17, we threw in a whole new dimension to our shtick – we built our very own brewery! After 17 years of contract brewing, our first Shmaltz Clifton Park batch emerged 17 months after the first draft of the business plan. Coincidence? Renaissance means “Re-birth” in French & Italian. In Buddhism, the concept does not truly translate as “reincarnation” but instead as “becoming,” or a “stream of consciousness.” 11 syllables structure a haiku. Shakespeare penned 17 comedies. In The Simpsons episode “Duffness” Homer sings “When I was 17″ about buying his first beer with a fake I.D. “I drank some very good beer. I stayed up listening to Queen, When I was 17.” In The Office, Dwight recites Rule 17 that all Schrute boys must learn: “Don’t turn your back on bears, men you have wronged, or the dominant turkey during mating season.” Knowledge and growth come in many forms. It is taught that Nirvana is only attained when the soul transcends cycles of rebirth. Looks like Shmaltz just isn’t there yet. So with 17 malts, 17 hops, and 17% ABV, JEWBEL4TIONREBORN serves as another mark of our death as a contract brewer and proof of our conversion to a new life as brewery owner…… L’Chaim!!!