From Hearthstone Brewery in North Vancouver in collaboration with Stillwater Artisanal out of Baltimore Maryland comes their “That New Trapp” a Funky Brett IPA labeled as a Hazy New England-Style Trappist Ale.  The beer pours a lightly cloudy orange with a white head.  The aroma consists of brett funk, stone fruit, tropical fruit and maybe a hint of floral hops.  The flavour is of brett funk, tropical fruit, stone fruit, lemon, some biscuit and mild bitterness.  The alcohol content comes in at 6.5% with an IBU of 35.  Been a fan of Stillwater for some time and have been a big fan of Hearthstone Brewery since they opened and this beer is an amazing marriage of both breweries.  Great flavours really do combine with this brew to make a North East IPA even if it is not as murky as it should be for the style.

Commercial Description:  A funky brett IPA with an irresponsible amount of Citra, Mosaic & Amarillo hops fermented with a blend of reckless yeast strains, Brett B and Conan.  A collaboration beer from Hearthstone and Stillwater Artisanal. 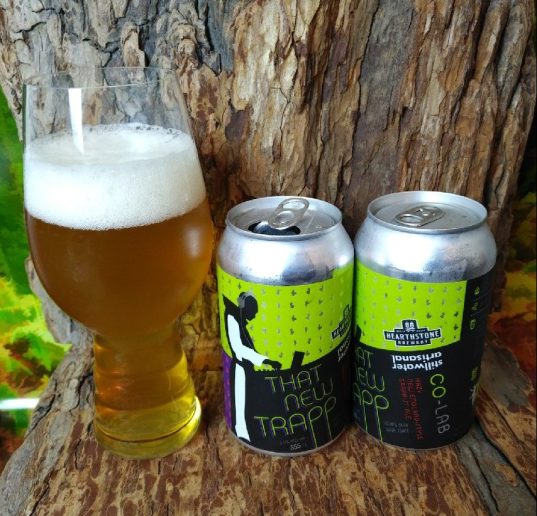