From Moody Ales out of Port Moody comes their “Belgian Golden Strong”.  The beer pours a orange colour with a white head.  The aroma consists of bubblegum, banana, fruity notes and a sweetness in the finish.  The flavour is of bubblegum, banana, caramel, candi sugar, mild bitterness, spices and Belgian yeast. The alcohol content comes in at 8.5% with an IBU of 28.  This is a tasty Belgian style beer and a worthy addition to the Moody Ales small batch series.

From Dageraad Brewing in Burnaby BC comes their newest core beer in the “Brune” a Belgian abbey dubbel.  The beer pours a deep red brown colour with a brown head.  The aroma consists of figs, mild bananas and brown sugar.  The flavour is of figs, toffee, brown sugar, mild bitterness and a hint of bananas.  Even with an alcohol content of 7.5% this beer does not have much of an alcohol note to it.  I don’t know very many Brune that are made in Canada and this one is great.  I am glad that this has become one of their standard beers!

From Old Abbey Ales the new brewery on the block in Abbotsford comes their “Dark Strong Ale”.  The beer pours a deep almost ruby brown colour with a light brown head.  The aroma consists of dark fruits, candied sugar and a sweet toffee finish.  The flavour was of dark fruits, candied sugar, bananas, sweetness and an earthy finish.  The alcohol content comes in at 9% and an IBU of 26.  This is a solid beer to be launching a brewery with with a ton of flavour and a fairly smooth finish for a 9% beer.  I look forward to when the bottle conditioned beers start to arrive in stores. 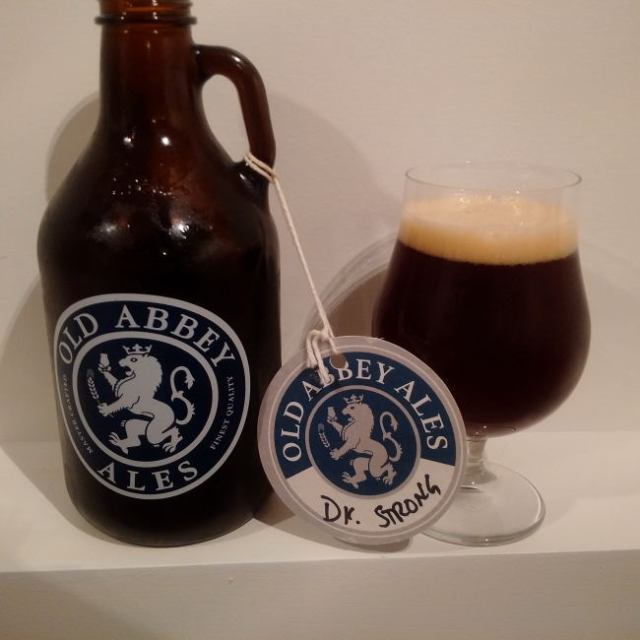 From Victoria BC’s The Moon Under Water Pub & Brewery comes their “This Is Hefeweizen”.  The beer pours a cloudy golden colour with a white head.  The aroma consists of wheat, banana, fruits, spices and yeast.  The flavour is of wheat, citrus, banana, spices and yeast.  The alcohol content comes in at 5.5%.  Hefeweizen beer as great summer sippers and this one is right up there with the best in BC.

Commercial Description:  Unlike every other beer we have brewed, this one follows some style guidelines. Why? Because in a land where big breweries produce bland, boring blonde ales and pass them off as Hefeweizens, something traditional needed to be done. Brewed with 70% weizen, decoction mashed, and open-fermented with hefe from Bavaria. This is Hefeweizen.

From Kansas City Missouri’s Boulevard Brewing Co comes their “Bourbon Barrel Quad 2013” part of their Smokestack Series a series of big bold high alcohol beers. This beer says its number 6 in the Smokestack Series. The beer pours a rusty colour with an off white head. The aroma consists of malts, cherries, dark fruits, Belgian yeast, oak, bourbon and a hint of banana. The flavour is of bourbon, cherries, dark fruits, Belgian yeast, oak, malts, vanilla, caramel, cinnamon, oak, banana and a boozy finish. The alcohol content comes in at 11.8% with an IBU of 26. This is a very tasty and big ale and I am happy that I was able to procure a bottle.

Commercial Description: Based loosely on the Smokestack Series’ The Sixth Glass, this abbey-style quadrupel is separated into a number of oak bourbon barrels where it ages for varying lengths of time, some for up to three years. Cherries are added to make up for the “angel’s share” of beer lost during barrel aging. Selected barrels are then blended for optimum flavor. The resulting beer retains only very subtle cherry characteristics, with toffee and vanilla notes coming to the fore.