From Strange Fellows Brewing in Vancouver comes their “Krampus Belgian Dubbel”.  The beer pours a brownish orange with a tan head.  The aroma consists of dark fruits, stone fruits, caramel and toffee.  The flavour is of dark fruit, stone fruit, candied sugar, toffee, caramel, resin, bitterness and some alcohol.  The alcohol content comes in at 8.5% with an IBU of 30.  The Dubbel style resonates with me and I personally think that Strange Fellows have a hit on their hands here.

Commercial Description: Krampus has a dark side and preys on the naughty, while you are making merry there may be something lurking in the streets. Contrary to his personality the Krampus Belgian Dubbel is double brewed with Belgian candy sugar and Belgian dark malts and rich with the flavour of dried stone fruits and subtle toffy notes. This deceptively alcoholic beer has a long warming affect on the constitution to help ignite the dark stranger inside each of us. Merry Krampusnacht! 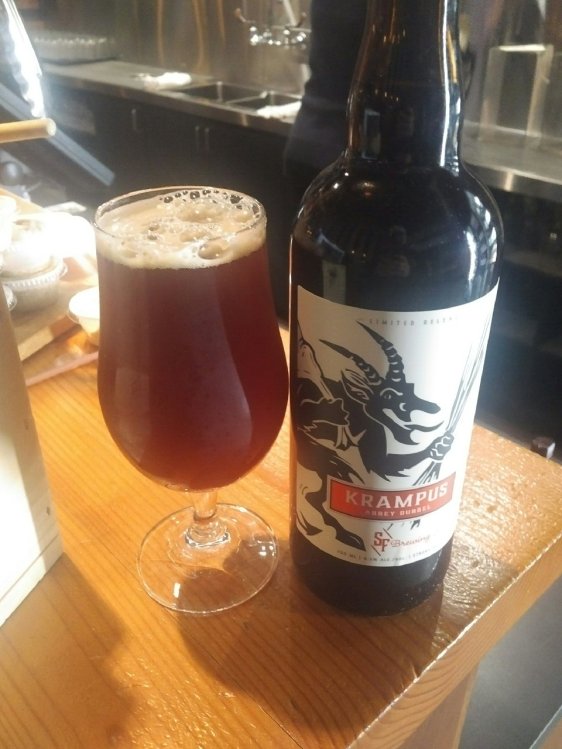 From Penticton’s Bad Tattoo Brewing comes their “Dia De Los Muertos” (Day of the Dead) a Belgian Dubbel and the first seasonal release from the brewery that was wax sealed.  This bottle was aged for a full year in my cellar. The beer pours a deep red colour with a tan head.  The aroma consists of dark fruit, candied sugar, sweetness and a mild booze note.  The flavour is of dark fruits, toffee, candied sugar, mild bitterness and sweetness.  The alcohol content comes in at 9% with an IBU of 10.  I wish I had remembered to do a review of my first bottle to compare the beers but this was extremely tasty after cellaring for one year.

From Brewsters Brewing Company out of Calgary Alberta comes their “Brooding Soldier Barrel Aged Dubbel”.  The beer pours a ruby red colour with a tan head.  The aroma consists of dark fruits, candied sugar, oak and a sweet finish.  The flavour is of dark fruits, toffee, candied sugar, dark fruits, red wine, oak, semi sweet, oak and a mild boozy finish.  The alcohol content comes in at a strong 8%.  The first sip of this beer I was not sure about it but by the second sip I was sold.  This is a great beer with all kinds of things going on in it.

Commercial Description:  You may have noticed some wine barrels on display in our restaurant in the Calgary Foothills industrial area. Rest assured, we’re not dipping our toes into winemaking. We’ve been busy concocting this barrel aged brew. Brooding Soldier Barrel Aged Dubbel exhibits a complex, malty sweetness with notes of ripe red fruit. It has a warm, dry finish and oaked wine character.

Half Pints Brewing from Winnipeg Manitoba has created a new mixed 6 pack called the “Trinity Series”.  The series includes 3 different beers called The Father (Belgian Dubbel), The Son (Belgian Pale) and the Holy Spirit (Belgian Wit).  The religious overtone of this set probably ties in with the fact that Belgium has so many Trappist Monasteries that brew beer.

The beer pours a deep copper colour with a tan head.  The aroma consists of dark fruit, earth, malts and yeast.  The flavour is of earth, dark fruits, sweet brown sugar, caramel, roasted malts, some mild bitterness and a very dry finish.  The alcohol content comes in at 7.2% and an IBU of 20.  This was my favourite of the three beer in the series as it was a pretty good representation of a style that I really enjoy.

Commercial Description:  Brewed in the Belgian Dubbel style, The Father is our first beer in the Half Pints Holy Trinity series. Brewed using divine inspiration and a combination of Vienna, Dark Crystal, and Biscuit malts, this full bodied ale is hopped with Czech Saaz and Styrian Goldings. The special yeast strain we have used creates the aroma of ripe fruit while an addition of Demerara sugar creates a dry finish which Monastic brewers say lends a “digestible” quality to the beer. Try it with Manitoba Trappist Cheese or with a simple family dinner of baked ham, scalloped potatoes, and honey glazed carrots. Serve at 8 degrees celcius in a wide mouthed chalice. Unfiltered. 20 IBUs.

The beer poured a cloudy amber colour with an off white head.  The aroma consists of malts, fruit and Belgian yeast.  The flavour is of banana, mild dark fruits, yeast, malts and some mild bitterness in the finish.  The alcohol content comes in at 5.2% with an IBU of 22.

Commercial Description:  Brewed with divine inspiration and a combination of pale 2-row, Vienna, and medium crystal malts, this snappy ale is finished with East Kent Goldings and Czech Saaz hops. A special blend of yeast strains creates a malty, fruity aroma with a decidedly spicy finish. Try it with the Belgian classic mussels and pomme frites or falafel, fresh pita, and roasted garlic Tzaziki. Serve at 6 C. in a wide mouthed chalice. Unfiltered. 22 IBUs. 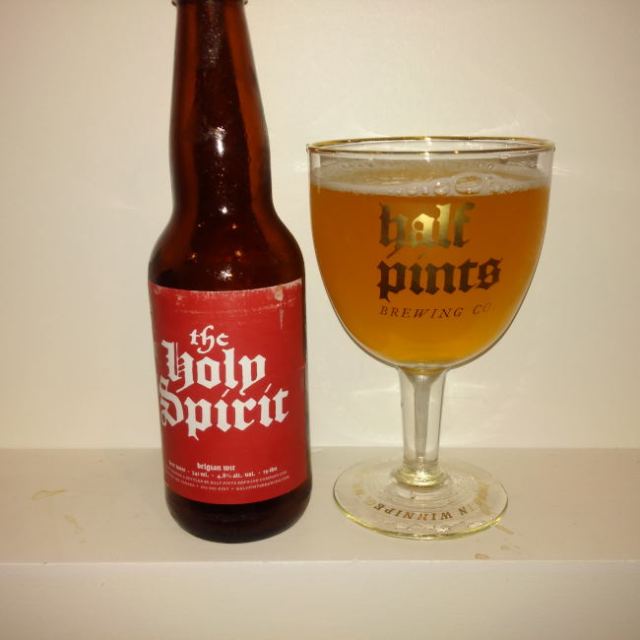 Commercial Description:  Brewed with divine inspiration and a combination of pale 2-row, raw wheat, and oats, this ale is steeped with a complex blend of spices including coriander, Curacao orange peels, and Kaffir lime leaves. It is hopped with Centennial and Czech Saaz for a citrus flower finish. Beneath the bright white head, the cloudy golden body holds a surprising depth of flavours with pepper, grapefruit, and a vibrant acidity. Serve at 6 C. in a tumbler. Unfiltered. 19 IBUs.

This was a very interesting project and I was quite happy to be able to sample one of the 6 packs myself.  Keep up the good work Half Pints! I also love the fact that they had a beautiful glass made up for this series that was available for purchase at the brewery.

Commercial Description for 6 pack:  Brewed with divin inspiration, Half Pints Trinity series is a beer lover’s pilgrimage into the variety and complexity of Belgian beer.  Using a special yeast blend from two distinct Belgian monasteries we created The Father, a strong and fruity Belgian Dubbel.  We then harvested the yeast from The Father which begat The Son, a snappy Belgian Pale.  This same yeast concoction was then taken from The Son and used once again which begat The Holy Spirit, a heavenly spice Belgian Witbier.  On the Seventh day, we tested.

From Red Collar Brewing out of Kamloops comes their “Dubbel” their take on a Belgian style Dubbel.  The beer pours a deep ruby colour with an off white head.  The aroma consists of roasty malts, dark fruits and some chocolate.  The flavour is of chocolate, roasted malts, coffee, dark fruits and some yeast.  The alcohol content comes in at 6% with an IBU of 23.  I wouldn’t say that this is a typical Dubbel from my experience but I did quite enjoy it and it will drive me to try more beer from this brewery. 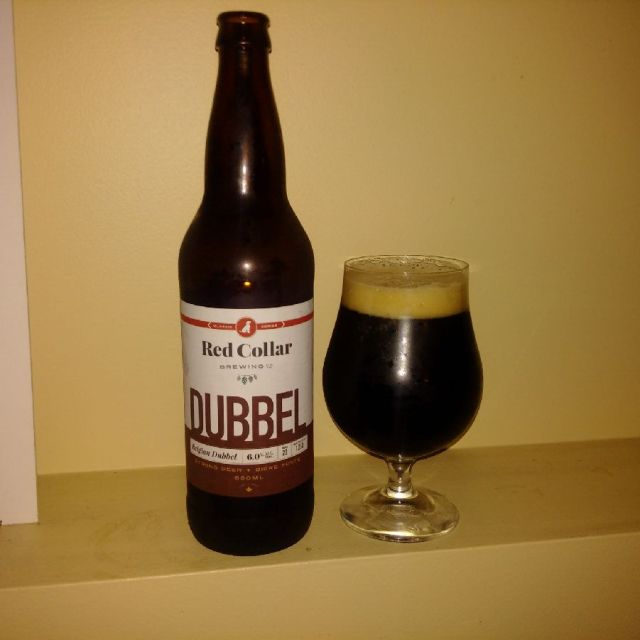