From Oxfordshire England’s Wychwood Brewery in partnership with Duchy Originals comes the “Duchy Originals Old Ruby Ale 1905”.  This ale pours an amber colour with an off white head.  The beer smells of sweet malts.  The taste consists of sweet roasted malts, caramel, toffee and some fruit (melon) with a light hops bitterness.  The women could taste sauerkraut but the men could not who knows?  This is an average beer and would be good to sit down an drink a few but it is not to special.

Read about the tasting here

From Phillips Brewing out of Victoria BC comes their one off beer “PANDAMONIUM The 11th Hour Anniversary Ale” a double IPA.  Being their 11th anniversary everything about this beer comes in 11’s.  Pandamonium pours a golden colour with a white head.  The beer smells of floral hops, citrus and pine with some sweetness hiding about as well.  The lasers blast any sweetness away though!  This beer is majorly hops forward with a shot of pine flavoring!  Hidden in behind all the hops there is some citrus hiding in there somewhere.  This beer sits at 11% alcohol and has an IBU of 111.  This is a slow sipping beer for me but it is super tasty.  “This beer has a fierce flavor.  To say it is bold would be like calling chrome yellow a pastel” (Carmen).

the bottle reads “Every 11 min. hops are added to a 111 min. boil for a total of 11 hops additions (Plus dry hopping of course).  Giant Mutant Pandas would want it this way.”

Look out for a Panda-zilla coming your way soon!  He has freaking lasers coming out of his eyes so take notice!

Tasting Suggestions from my Friend Carmen : Spicy Sausages, lamb kebabs grilled on the BBQ.  This needs a strong flavored meat otherwise it will absolutely dominate the meal. 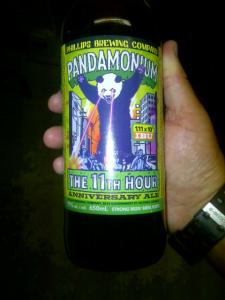