I just got back from a vacation to the Big Island of Hawaii and stumbled upon a brewery that I had never heard of.  I just happened to walk by the beer section of the small local grocery store and saw 3 bombers from a Hawaiian brewery I had never heard of.  Once I opened one of the bombers and tried it I knew I had to go!  Luckily for me Big Island Brewhaus was only between an hour or an hour and a half drive from where we were staying and it was a beautiful mountain highway drive.  There was no way I was going to miss out on checking this brewery out so my and my girlfriend got into our rental car and took a beautiful scenic drive (although slow, as the speed limits are maddeningly slow on the island).  Beyond the fact that they produce award winning craft beer in very small batches they also make some amazing Mexican food.  I love the fact that this brewpub does not make regular old pub food but instead is a Taqueria that makes amazingly flavourful Mexican food.

Seeing as I drove I was very happy to see that they sold beer by the paddle.  The paddle consisted of 5 beer at around 3.5oz each and you had your own choice of their beer.

I sampled 5 awesome beer including their Overboard IPA, Paniolo Pale Ale, Red Giant Ale, Red Sea of Cacao and Hoptopias IPA.  Every beer I tasted was great although their IPA’s are the real stars.  I will be reviewing all five beer in the next little while.  With the beer I also ordered the Spicy beef tacos.  These were to die for with the spicy beef on proper soft corn tortillas.  My Girlfriend also had their Cheese enchilada and it also tasted amazing although I did not take a photo of it.  Lets start with some photos of the Taqueria.

After dinner I asked if I could take a look at the brewery as it was in a separate building.  Luckily the guy in charge was in the restaurant at the time and I was given the honor of checking out their brewery. The brewery is only 3 years old now and they have only been bottling for about 6 months now as of Feb 2014 and they only distribute to some of the Hawaiian Islands.  This brewery really reminded me of some of the small, almost nano breweries in Metro Vancouver.

This brewpub is now one of my favourite brewpubs I have ever eaten/drank at.  The food was amazing and the beer was better.  The staff was all very friendly and the service was pretty quick for small town Hawaii (not super quick but friendly and helpful).  I am so happy that I stumbled upon this gem of a brewery and I look forward to the next time I make it back to the Big Island.  If I am on this Island again I will always hit up this spot and you should too!

Click here to see larger versions of all photos 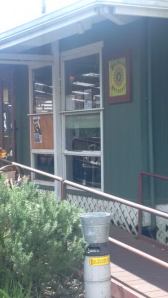 From Victoria BC’s Vancouver Island Brewery comes “Hermann’s Dark Lager”.  This Lager is named after one of the breweries first brewmasters who was Bavarian and uses his German recipe.  The beer pours a deep black with a brownish head.  The smell of the beer is very malty with some coffee notes.  The flavor of the beer is very high on the malts with some creamieness and coffee with a light hops hit.  To me this beer is the Stout of Lagers!  The beer sits at a 5.5% alcohol content.  This beer won an award this year for top black lager in Canada or something to that effect.  This is a very good black lager and I can not wait to pick it up again. 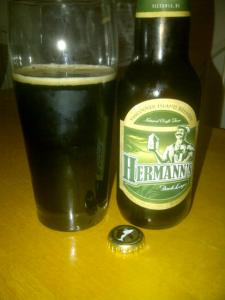 From Phillips Brewing out of Victoria BC comes the “Slipstream Cream Ale”.  The beer pours an amber/brown colour with an off white head.  The smell is not to complex with deep malty characteristics and some creamieness.  The flavor is very nice with deep malts, mild hops, spices and a creamy finish.  The beer has an alcohol content of 5%.  I would bike out to the store to pick some more of this beer up.  I purchased this beer in a 12 bottle mixed pack as seen in the photos below. 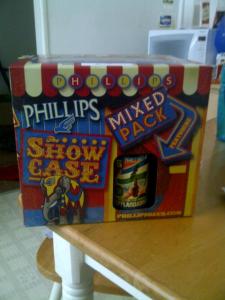 From Scotland’s Harviestoun Brewing comes the “Shiehallion Lager”.  This beer is cask conditioned and as such tastes different than most lagers.  The beer pours a pale golden colour with a white head.  The beer smells of malts with some floral hops hidden behind it.  The flavor consists of malts some grapefruit and a mild hopieness.  This beer is full flavored with an almost creamy medium boddied finish (This is not watery lager).  The beer sits at a nice 4.8% alcohol.

Food Pairing according to O’hare’s Beer Club notes are as follows:  Seafood, oysters on the half shell, calamari or a nice light salad.

From Vancouver BC’s Kinda Craft Brewery Granville Island Brewing comes the “English Bay Pale Ale”.  This brew pours a light golden colour with a minimal white head that does not last long.  The beer does not have a strong scent but smells lightly of malts and overall sweetness.  The beer has a very light flavor as well that hints at malts and very light hops with a crisp and sweet finish.  This beer has an alcohol content of 5.0%.  This is not a fantastic beer but it is a nice light flavored beer if you are just looking to enjoy a couple of beer on a hot patio.  You can not go wrong really with a GIB mixed pack that includes this beer.