From Superflux Beer Company brewing out of Strathcona Beer Company in Vancouver comes their “Double Infinity (Galaxy)” a Double IPA.  The beer pours a cloudy orange colour with a white head.  The aroma consists of tropical fruits, stone fruit and citrus with a herbal and floral finish.  The flavour is of herbal hops with citrus rind, tropical fruits, melons, stone fruit, resin and bitterness with a hint of alcohol.  The alcohol content comes in at 8%.  Superflux Beer Company is a big player in the local North East IPA style and this one is killing it just like their other brews.  Pick this up if you can find it. 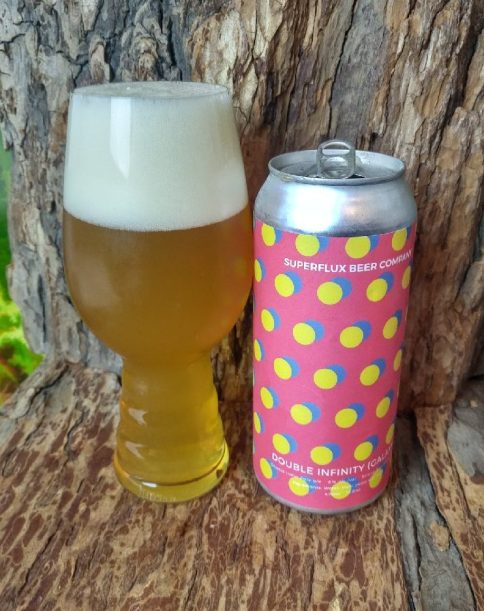 Dead Frog Brewing  out of Aldergrove BC is a special brewery to me.  Back when I was still drinking garbage beer I heard about this new local brewery named Dead Frog.  The name was just bazaar enough to get me to pick up a case and try it out.  I was hooked!  I did not know what a good lager was until I tried their beer.

When I heard that they had started to brew a real IPA I did not know what to expect as their main business is craft Lager.  I searched high and low for this new “Fearless India Pale Ale” to no avail it was sold out everywhere.  What a predicament!  I happened to be driving by the brewery for work so I stopped in to pick a bottle up.  I noticed right away it looked nothing like their other beer bottles (interesting).

Once I got home and the bottle was chilled I cracked it open.  The beer poured a very nice coppery colour with a large tan head.  There was lots to be found on the nose including citrus, tropical fruits, grapefruit, pine, and floral hops.  This is a hop forward IPA in flavor for sure with citrus, tropical fruits, pine and some mild grapefruit.  This is one mighty fine IPA containing all the right characteristics of a Real IPA including enough hops that it  just might hop away (get it).  The alcohol content of the beer is 6.5% and the IBU is 77.

This beer is the first collaboration by two of the new members of the dead frog family Tony Dewald and Timmy Brown.  These two brother in-laws know their brewing!  With this addition to the ligneup I cannot wait to see what these two think up next!

Bottle Description: “A BIG, BOLD IPA THAT LIVES UP TO ITS NAME Our Fearless IPA is a hop forward India Pale Ale crafted with premium malts and hops from around the world.  Zythos and Galaxy hops combine to provide a tropical aroma while cascade and Columbus provide a citrus-like bitter finnish.” 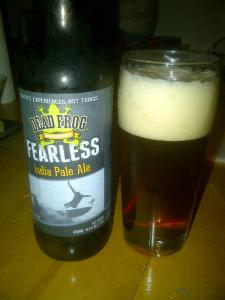 So do yourself a favour and find this Dead Frog asap!  Like they say “Nothing goes down like a cold dead frog”!  For drinking this beer you even get a badge! 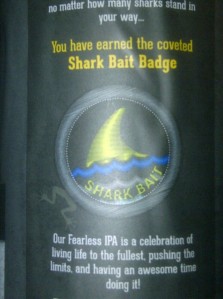