For the 4th year in a row Hops Connect has held a University brewing club competition in Metro Vancouver called the Hops Connect Cup.

The judging was done in the days before the event by local BJCP judges and previous winners of the Winning Beer award.  The Hops Connect Cup event was held on November 12th, 2016 at Big Rock Urban Brewery in Vancouver.  This year brewing clubs from UBC, UVic, KPU In BC and Olds College from Alberta competed in the brewing competition.  Each brewery was challenged to brew multiple categories including Pilsner, IPA, Double IPA, Pale Ale and stout with awards also for best name, winning beer and the Hops Connect Cup best overall school.  Hops Connect supplies the hops for these home brews and the students design the recipes.

I have unfortunately not been able to make it out to the Hops Connect Cup since the first event they held 4 years ago.  Each school either sent or brought samples of the home brews that were entered into the competition so that people from other schools could sample the entries.  This year many of the entries were very strong and I enjoyed every sample that I tried.

Here are the winning beers from this years submissions.

Thanks to Hops Connect for these slides.

A good number of students from the university brewing clubs came out to this event to celebrate home brewing and to take home hardware.  It is to bad that KPU and Olds College did not have representatives at the event to accept their awards!  I would like to congratulate all of the winners and Congratulate Olds College on stealing the Trophy from the province of British Columbia this year!

Its always exciting to check out the new up and coming home brewers and this event is a great place to see the upcoming talent.  This year had some great talent and previous winners are currently working at local breweries!  It is awesome to see that a local Hops company is fully on board to help encourage the future brewers in the craft beer industry to follow their dreams.  The coolest thing about this event is that the winner of Best Beer gets to brew their winning beer at a commercial brewery and have it released to the public.  This years winner EH.P.A. made by members of the UBC Home Brew club will get to brew their IPA beer at Moody Ales and have the beer sold commercially.  Keep up the great work Brewing Clubs!

Hops Connect sells hops to commercial brewers, u-brew shops, home brew shops and home brewers.  If you fall into one of these categories make sure to check them out with the links below! 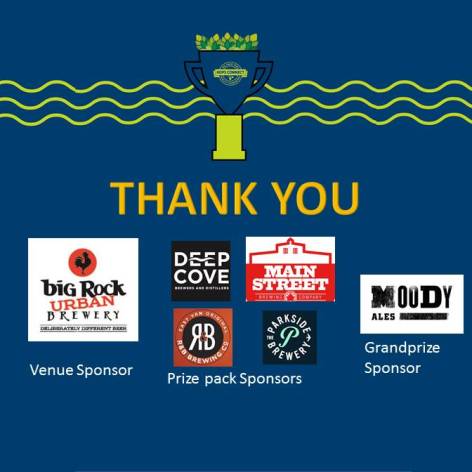 Back on October 26th, 2013 Hops Connect and Deep Cove Brewers & Distillers held a home brew competition.  Click here to check out the competition.  The contest put the Simon Fraser Brewing Club (S.F. Brew) against University Of BC brewing Club (brUBC).  There were a bunch of great beers in the competition but the winner of Best Of Show was Hop-A-Rella IPA.  Hop-A-Rella IPA was brewed by Natasha Peiskar and Jill Plotnikoff.  The prize for the winning beer was to have a 15HL commercial batch brewed at Deep Cove Brewers and Distillers.  Recently Jill and Natasha were able to brew this beer with the help of Brew Master Kevin Emms.  The beer was renamed the “University Brew Off IPA”.

This is not the original Hop-A-Rella IPA but a re-imagining tweaked for the larger brew size.  The beer pours a amber orange colour with a white head and some lasting lacing.  The aroma is malty with fruity esters and floral hops.  The flavour is of big hops bitterness up front with sweet malts, tropical and citrus fruits, resin and pine.  The alcohol content comes in at 7% with an IBU of 78.  The Ladies really hit it out of the park with this beer but then tasting the Hop-A-Rella back at the competition I knew that they would. 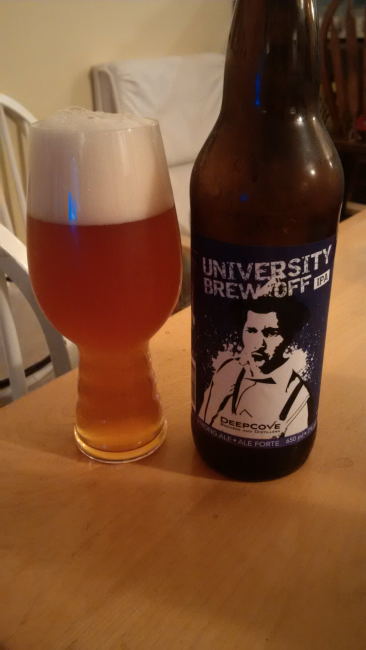 I was not able to make it to the brew day due to work but Natasha Peiskar sent me these photos.

I was also unable to go to the launch party as I was out of town but again Natasha Peiskar sent me photos.

On October 26th, 2013 there was a friendly competition held between Simon Fraser University’s brewing club S.F. Brew and University of British Columbia’s brUBC.  The competition was held at Deep Cove Brewers and Distillers.  This was the first Annual University Home Brew Awards Party and the winning club won the Hops Connect Cup.  Let me start by saying that both clubs made some amazing beer, with every beer poured at this event actually being an ale (from what I saw).

All beer was judged at a separate location on a different day by outside judges.  I am not sure the details on the judging but I am sure it followed the proper rules of judging for beer.  Below is a list of the beer entered by both brewing clubs.

Before the winners were announced Daniel Collins the Managing director of Hops Connect talked about how the event came around and talked about the sponsors of the event who will be mentioned shortly.  Kevin Emms the Brewmaster at Deep Cove then talked to the entire crowd about craft beer and home brewing.  The last person to talk before the awards were handed out was Adam Chatburn the President of Camra Vancouver.  He talked on what Camra was about including what they do such as advocating for craft beer or real ale.  He also talked on the benefits of being a member such as discounts at restaurants and liquor stores that specialize in craft beer.  The last thing he talked on was cask ales.  The loosing team of this competition won a small pin cask with the promise that that club would be given a class on how to brew using a cask and how to use them.  The best thing about this event was that we were able to sample all the beer that was judged in this event!  There were so many great beer and I wish that I kept a list of what I was drinking and what I loved.  After everyone had had a good sampling of all the beer in the competition and people had listened to all the speakers it was time for the awards themselves.  Lets build some suspense and post the photos before the results!

I would like to now throw a shout out to all the sponsors of the event without them this event never would have happened!  The sponsors were as follows:  Hops Connect, Camra Vancouver, Dan’s Homebrewing Supplies, Bottle Jockey, Blue Smoke BBQ and Deep Cove Brewers & Distillers.  I may not have been involved with event personally but I would like to thank all of the sponsors personally for helping nurture the future craft brewers of BC!  Well its time to get onto the winners of this amazing event.  The team with the most wins overall won the Hops Connect Cup and the best beer of the event won the Best in Show award.

There were some very deserving honorable mentions as well including:

A big shout out to all the home brewers at this event as they have crafted some great brews.  Keep up the great work and I hope to come to the event again next year and try your beer once again with one more year of polish!  Congratulations to S.F.Brew for winning the fist annual Hops Connect Cup.  Better keep working hard to try and defend your win!  A surprise for the winner of Best In Show was to be able to brew a small batch of their beer with the Brewmaster of Deep Cove Brewing for a commercial release!  I would like to congratulate Natasha(Co Brewed by Jill) of S.F.Brews for winning the Best in Show for the Hop-A-Rella IPA.  I hope to be able to cover the brewing of this batch of beer and its release.  Hint Hint Deep Cove and Natasha!