From Torchlight Brewing in Nelson BC comes their “At 17 “(Tap 13).  This beer is a Belgian style Tripel brewed with apples that resided on their Tap 13 an unlabeled tap in the brewery.  The series of beers are named like the periodic table of elements with a big letter then a small letter and then a number.  Very few bottles are packaged of these beers  and I was absolutely lucky to get a bottle in trade from the owners.  The beer poured a copper colour with an off white head.  The aroma consists of Belgian yeast, apples, lots of fruit and a sweet finish.  The flavour is of Belgian yeast, bubble gum, apples, fruity notes, candi sugar, hint of spices, very mild bitterness.  The alcohol content comes in at 9.1%.  This Belgian Tripel is really tasty and does not suffer from the overly sweet notes that many do for me.  I’m sad to say you will likely never be able to try this but I hope you will consider heading out to Nelson to check out the brewery and maybe get lucky enough to try something from Tap 13. 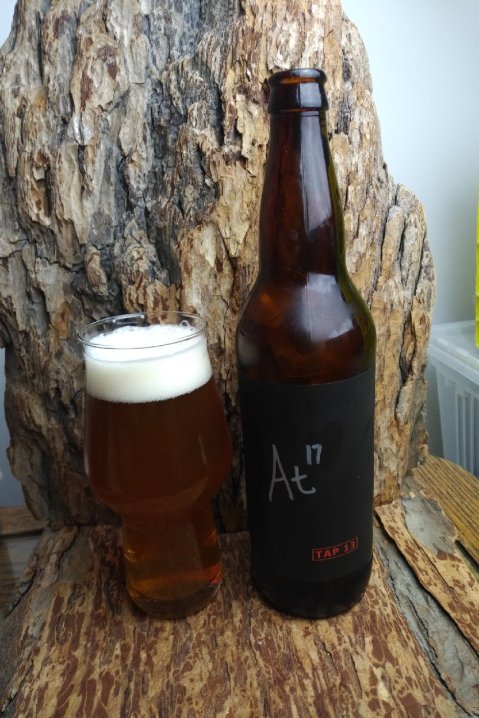 From Spencer Hill Cottage Brewery in Grand Forks comes their “Big Horn Amber Ale”.  This bottle comes from batch number D0067.  The beer pours a deep amber, orange colour with a tan head.  The aroma consists of caramel, fruit, floral hops and a semi sweet finish.  The flavour is of caramel, stone fruit, melon, citrus, pine and bitterness.  The alcohol content comes in at 5.2%.  For a brewery that currently only makes one beer this is quite tasty.  I hope the owner produces more than just this beer in the future.

Nelson BC has a fairly new brewery in Backroads Brewing.  The brewery is located on the main drive and a great spot to stop on a walk through town.

The tasting room has a great feel with lots of wood finishings and shared tables.  The bar is inviting and has some bar stools on one side.  They have lots of growlers and some good swag for sale also.  The brewmaster Mike Kelly was originally from Nelson Brewing Company and has a ton of experience in brewing and it shows with their beers.

The brew house in the back is an 8HL brewhouse.  They have 1-16HL unitank and 3-8HL unitanks with a total capacity of 40HL.  A nice touch for this brewery is that they have 8-8HL serving and conditioning tanks in their cooler.  these tanks are hooked right up to the taps in the taproom.

If you find yourself in Nelson I really recommend you check out this brewery.  They are making tasty beer and it does not make it far outside of the brewery at this point!

Trail Beer Refinery in Trail BC located in the Kootenays region of BC is one of the newest breweries in the province opening on March 25, 2017.

Trail is a town that is not like many in the province where 50% of the residence actually work at a refinery on the hill.  They understand refining something into a material that is more marketable.  This business just happens to refine water into a liquid that is far more interesting.  Beer!

This brewery is more a brewpub than a tasting room and production brewery.  They serve some tasty foods but at the same time they keep it simple.   They have things like pizza and burgers.  If the brewery was not as busy as it is they would have a bocci court but most often they actually just have more tables to house the crowd they are getting.  I find it amazing just how busy they were as it feels much like a Vancouver brewery.

Trail Beer Refinery did not play around when they set up their brewery.   They purchased a 25HL brew house with 2 – 100HL fermetnors and one – 25HL fermentor.  When they did their research in Vancouver they decided to go big with the possibility of expansion instead of starting to small.  The brewery started as an industrial brand much like the town really is.  They do not want to be the most experimental brewery at this point but hope to convert the local macro drinkers to locally made craft beer.  With the opening of the brewery they share the same head brewery as Highway 97 Brewing in Penticton Andrew Anker.  The wife of one of the owners has done the brewing program at Siebel Institute in hopes of taking over brewing.

The brewery has the tag line Work Hard Play Harder and I think this really explains the town as a whole.  If you find yourself in Trail it is worth checking out the brewery.

To learn more about the brewery listen to our Pacific Beer Chat episode on the brewery.

Chelsea of Brewtiful British Columbia and I headed over to Nelson for the grand opening of Torchlight Brewing’s new production brewery on June 24th, 2017 .  It was also their third anniversary party as they opened their original nano brewery location in June 2014.

I had been to the original location soon after they opened and this new location is something amazingly different.  The old location was way more hands on with plastic mobile fermenters with little to no refrigeration.  Check out my original post on the brewery.  The tasting room was also very small and not as well laid out.  By the end of 2016 their brewery just could not keep up with demand and they decided to move into a much bigger production facility.

The new lounge is amazing!  The space is very large with lots of seating (60 seat capacity) and 20 taps available with 6 growler filler guns.  Currently not all of the taps are full but they do have some local guest taps pouring as well as their own beer and their brand new sodas.  On top of the beer and sodas they also do cocktails and have a full kitchen that serves tasty food.  I enjoyed all of their beer as I always do but their Sodas are really amazing also and a good choice between beers or for your friend or child that do not drink alcohol.

The brewery has grown from their original nano system to a 20HL brewhouse.  The current brewing capacity is 100HL wich is an amazing upgrade from the old brewery with a 16Hl capacity. Not only does the brewery fill growlers but they produce bottles on their 8 head bottler.  They also now distribute outside of Nelson to much of British Columbia.  Make sure to look for their bottles in your favourite bottle shop and if they don’t have them ask the store to bring them in.

Not only is this a great brewery located in the Kootenays but the staff and the owners are great people and will make you feel very welcome.  Their 13 staff members will make sure you have a great time while you visit them.

For more information check out our Pacific Beer Chat episode where we sat down and interviewed the brewery.