From Strange Fellows Brewing in Vancouver comes their third of four beer of 2017 in their Fellowship Club the “Kriek” a Lambic Style Ale.  The beer pours a red colour with a white head.  The aroma consists of cherries, berries, tart funk, oak and sweetness.  The flavour is of with a dry finish.  The alcohol content comes in at 6%.  This is one great beer and possibly my favourite of the Fellowship so far.

Commercial Description:   With the Holiday season just around the corner, we are excited to announce that today the third beer in this year’s Fellowship will be ready for pick up! The beer, a Kriek-inspired ale aged in oak barrels with Okanagan cherries is a style we have always adored and this is, we feel, an homage to a tradition that has inspired us for years.  Kriek is the Flemish word for a Lambic beer made with cherries, and Lambic is a class of sour beer made using spontaneous fermentation. Just as Champagne comes from a particular region of France, Lambic comes from the Pajottenland, a valley that runs from Brussels to the South West. Because Clark Drive is not in the Pajottenland, we classify this beer “Lambic-style” in respect of a centuries-old tradition. In our opinion these are some of the coolest beers in there world.  If you are familiar with the style, you will notice that our Kriek is a touch more sour than those examples from Belgian lambic producers Cantillon or Drie Fonteinen. When opening the bottle, you will be hit with aromas of vanilla, oak, and sweet cherries. The cherries we used impart a juicy fruit character, a touch of sweetness and cinnamon. Just as with the Little Red One, we recommend drinking this beer at cellar temperature rather than cold from the fridge. 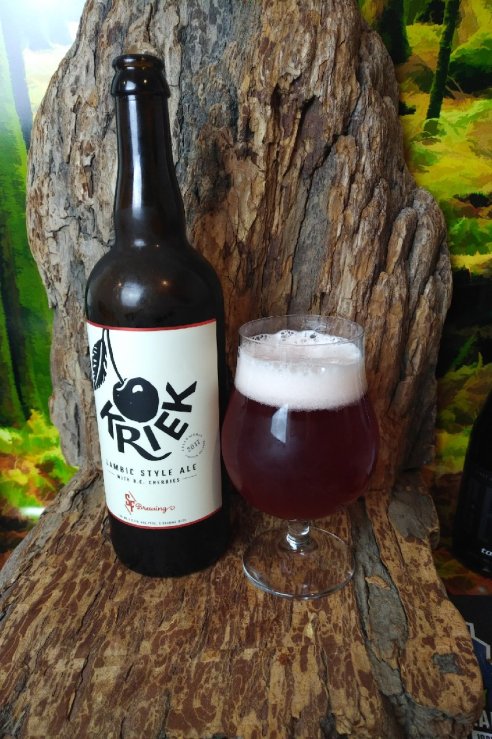 From Timmermans in Belgium comes their “Pumpkin Lambicus” a pumpkin lambic.  I don’t rush out for pumpkin beers like I used to but when I saw a pumpkin sour I had to check it out.  The beer pours an orange colour with a tan head.  The aroma consists of a lambic funk, sweetness, mild pumpkin and a hint of bready malts.  The flavour is of fruit, pumpkin and pumpkin spices, lambic funk and some cinnamon.  The alcohol content comes in at 4%.  I was not expecting much with this beer but I was curious.  I was happy to see that this was actually quite good and I would not hesitate to pick it up again.

From Brussels, Belgium’s Cantillon comes their “Fou’ Foune 2013″ an Apricot Lambic.  This beer was bottled on August 30th, 2013 and consumed on April 14th, 2014.  The beer pours a light golden orange colour with a white head and no lacing to be found.  The aroma consists of some mild funk, apricot, unripe fruit and some yeast.  The flavour is of some funky acidity, apricots, unripe fruit, yeast and an overall tartness.  The alcohol content comes in at fairly standard 5%.  This is just another great beer being produced by Cantillon.  I don’t know if I would pay the huge premium for this beer again or hunt as hard as I had to to buy this bottle but I would love to have it again in the future regardless.

Commercial Description:  A marvellous wine grower’s house with a view on the Rhône river. A large table with a perfectly roasted young goat and delicious wines (Hermitage and Saint-Joseph).  Around the table, only good friends.  It was 1998. There was a friendly atmosphere, the food was excellent, it was a perfect occasion to improve the world and let our imagination run away. Improving the world has remained an illusion, but one of our fantasies has become reality.  François Daronnat, an apricot grower nicknamed “Foufoune” was one of the participants.  He kept on singing the praises of his “Bergeron” apricots : they were the most natural, the most beautiful, the most delicious, sweet and acid at the same time.  “With those apricots, I could brew you a beer, dear François”, I told him. But my spirits got bemused by the great Rhône wines and I forgot all the dreams and crazy ideas which pop up at these great moments.  Foufoune, however, hadn’t forgotten about the apricots and the beer: on a morning in July 1998, I discovered all of a sudden 300 kgs of deliciously mature “Bergerons” outside the Cantillon brewery.  Foufoune was obviously someone who kept his promises.  It was up to us now. The result was perfect and the limited production of apricots lambic was destined for a small part of the French market.  Due to the success of our provençal beer, 1200 kgs of apricots are delivered now every year to the Cantillon brewery. The fruits are stoned by hand before being soaked in 2 years old lambic. The beer extracts the taste and the aromas very quickly and the Fou’Foune is bottled after two months. The beer is rather sour, slightly turbid and has a pale gold colour. Its production is limited to 3000 liters a year. A large part of the bottles go back to the region where these apricots come from. People there consider the Fou’Foune Cantillon as a local beer. 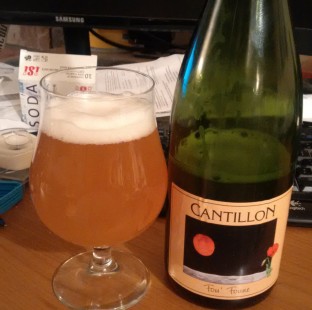 From Brussels, Belgium’s Cantillon comes their “Grand CRU Bruocsella Lambic Bio 2008” this bottle filled in March 2012.  This beer is brewed in the same way it was in 1900 with the only change being that they moved to organic ingredients in 1999.  The brew pours a cloudy orange with basically no head and very low carbonation.  The aroma is of sweetness, yeast, apples and vinegar.  The flavour consists of Sweet, tart and funky notes with yeast and mild to medium vinegar.  The alcohol content is 5%.  This is a very good beer and very different than your average Grand CRU.  I am just glad that it was able to be brought into Canada!

Commercial Description;  he Lambic Grand Cru Bruocsella Cantillon is a lambic which has matured for three years in oakwood barrels and has been selected for its exceptional colour, taste and flavour.  Its light, slightly amber, yellow-gold colour and its aroma, a mixture of apples and honey, make the Grand Cru Bruocsella a very seductive beer.  Its taste derives from its dry character and its slight and discreet acidity.  When kept for a long time, its bouquet gets the fine flavour of roasted bread which, according to some, relates it to the white Burgundy “Chardonnay”.  This aristocratic beer is to our national beer patrimony what Mouton-Rotschild, Petrus or Romanée-Conti are to the wines.

From Belgium’s Brouwerij 3 Fonteinen comes their “Oude Geuze” a blended lambic beer aged in oak barrels.  This beer is created by blending 1, 2 and 3 year old lambics and then aging it for a year in oak barrels.  This lambic pours an orange colour with a white head.  The aroma is tart, sour and fruity.  The flavour is composed of tart, sour, sweet and fruity components.  All things that are expected from a beer using Belgian yeasts.  The alcohol content of this brew is 6%.  This is a first class lambic.  This beer has a rating of 100/100 on www.ratebeer.com.

COMMERCIAL DESCRIPTION:  Blend of 1, 2, and 3 year old lambics.
A true Geuze – a blend of 1, 2, and 3 year-old lambic, unfiltered and unpasteurized, and aged in the bottle for at least a year after blending. Refermentation in the bottle gives this Geuze its famous champagne-like spritziness. The lambic that goes into it is brewed only with 60% barley malt, 40% unmalted wheat, aged hops, and water, spontaneously fermented by wild yeasts, and matured in oak casks.