From Hood River Oregon’s Logsdon Farmhouse Ales comes their “Peche ‘n Brett”.  This beer is built off the base of their Seizoen Bretta with local Oregon Peaches added to the mix.  The beer pours a cloudy orange with a white head.  The aroma consists of peach, funky brett, tarntess with a sweet finish.  The flavour is of tangy peaches, spices, brett funk, yeasty, fruits, mild hops with a sweet and tart finish.  The alcohol content comes in at 10% which can be dangerous as you do not taste alcohol in the beer and the IBU is 35.  I think I still prefer the Seizoen Bretta over this beer but this is a great beer and if you can find it then grab a bottle.

Commercial description:  Our seasonal oak aged peach beer is brewed with local Oregon fruit. Peche ‘n Brett is b​rewed and refermented with the peaches added to in our award winning Seizoen Bretta. One and a half pound of peaches are added to each gallon of Bretta to produce a secondary fermentation resulting in complex oak-derived fruity dryness. Final refermentation with pear juice provides natural carbonation with added aromas and flavors captured in the bottle.

From Hood River Oregon’s Logsdon Farmhouse Ales comes their “Far West Vlaming” a Flanders Red Ale.  The ale pours a orange/amber colour with a tan head.  The aroma was of fruity tartness, yeasty funk and some malts.  The flavour was of tartness and tannins up front with oak, mild fruits, funky yest, mild vinegar and some mild red wine.  This beer was still pretty young and could have used some aging to mellow and build flavours but it was still really good.  The alcohol content comes in at 6.5%.

Commercial Description:  This red ale is brewed in traditional West Flanders style. A combination of light, crystal, and dark barley malt, wheat, and oats are brewed with local whole-cone hops and variety of select yeast and lactic bacteria. We age our red ale in oak barrels for a periodof time to develop complex richness, soft tannins, and fruity tart character.The ages beer is then blended with young beer to create the desired balance of malt sweetness with a dry finish. 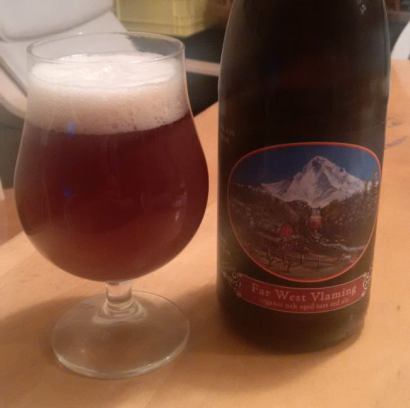 Once again it is time for my O’hare’s Beer club box to be reveled.  This months box was release just a bit early on Saturday June 2nd to help celebrate Vancouver Craft Beer Week.

Beer Included is as follows:

Reviews will come as I enjoy the Beer.  Once again O’hare’s has outdone themselves!  Thanks O’hare’s!!!

From Hood River Oregon’s Logsdon Farmhouse Ales comes their “Oak Aged Bretta” a Saison (seizoen) with the wild Brettanomyces yeast added and a portion aged in Oak Barrels to develop flavours .  This is an oak aged version of the Seizoen Bretta.  The beer pours a very cloudy orange colour with an off white head.  The aroma consists of a funky Brett with lots of fruit including mango, peach, citrus as well as some sweet vanilla and oak.  The flavour is of Brett, funk, slight sour, fruits including mango, peach, citrus and maybe some papaya with oak, vanilla and some brown sugar, pepper and hops bitterness.  The alcohol content comes in at a strong 8%.  The Seizoen Bretta is one of my all time favorite beer so when I heard there was an oak aged version I jumped at the chance to pick up a bottle.  This beer did not disappoint!  This beer is by far one of the nicest beer I have ever drank.

COMMERCIAL DESCRIPTION:  Our organic Oak Aged Brett is made with our Seizoen Bretta that is aged for a period of time to develop the wood aged character in the beer. Oak Tannins, vanilla notes and subtle smoky spiciness soften and mellow this beer over time. The aged unfiltered beer is refermented and carbonated in the bottle with select yeast strains to provide added dryness and complexity.

Commercial Description:  Cerasus is our organic kriek beer, a barrel-aged Flanders style red ale with two pounds of fruit added per gallon of beer.  We added both sweet and tart Oregon cherries during the aging process with a combination of several yeast strains and lactic bacteria to develop a secondary fermentation.  The crystal malts, oak tannins, and fruit develop into a soft well rounded beer of Burgundian character.  Bottle refermentation provides complex esters and yeast derived flavors.  This beer will increase in acidity as it ages, giving it additional character.  Store this beeswax-sealed bottle in a cold dark place and enjoy in a proper glass. 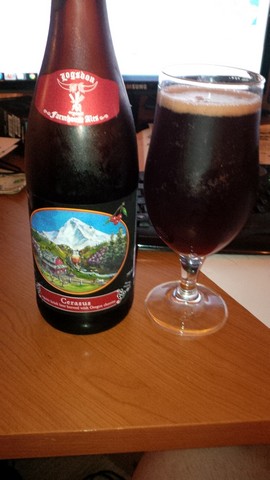