From Hearthstone Brewery in North Vancouver comes their “Rizzla Rice Lager”.  This beer is certified Gluten Friendly by both White Labs and Siebel Institute by having both labs test every batch of the beer to a threshold of 10 parts per million of gluten.  The beer pours a light straw yellow colour with a white head.  The aroma consists of mild bready malts, almost caramel, rice, citrus and a crisp finish.  The flavour is of bready and grainy malts, rice, mild caramel, citrus, sweetness, mild grassy hops and a crisp low bitterness finish.  The alcohol content comes in at 4.5% with an IBU of 18.  If you are looking for a nice crisp clean lager this could be a good choice for sure.  If you are looking for a gluten friendly beer this is definitely a good choice for you!

Commercial Description:  Rizla Rice Lager is an easy drinking Asian style lager. A great session beer for watching sports, weather, and people. Brewed using rice properly, for flavour rather than filler, bittered with classic northern brewer hops to balance the rice sweetness. Makes a great house lager.  Gluten reduced to less than 10 parts per million & it tastes great!  Every batch is tested twice by two labs.  All the flavour not the gluten! 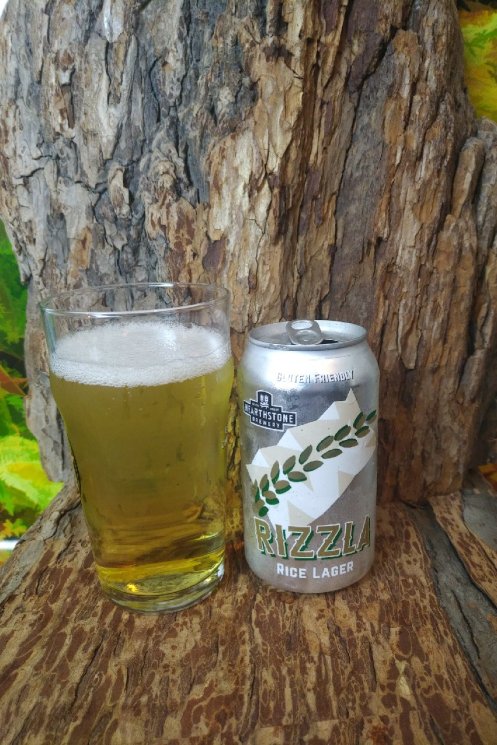 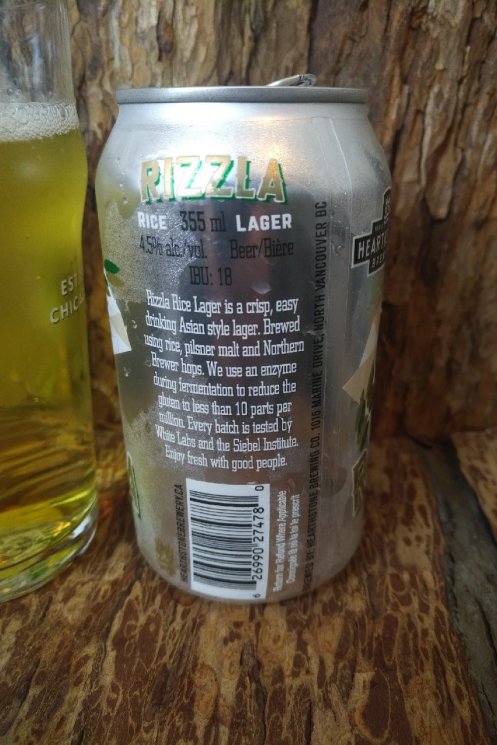 From Microbrasserie Le Castor in Rigaud Quebec comes their “Yakima IPA”.  Thanks to Cee of Beer & Other Shhh Podcast for this beer!  The beer pours an orange colour with a white head. The flavour is of orange, citrus, tropical fruits, juicy and floral hops. The flavour is of herbal hops, resin, orange, tropical fruits, mild caramel and bitterness. The alcohol content comes in at 6.5% with an IBU of 75.  This was a really enjoyable IPA and I am glad I got the chance to try it!

Commercial Description:  This beer is a celebration of the mighty West Coast hop, grown east of the Cascade mountains. Multiple varieties are used in this ale, at several different points in the brewing process. With emphasis on late hop & dry hop additions, we serve up juicy citrus flavours & aromas on a bed of pale malt. 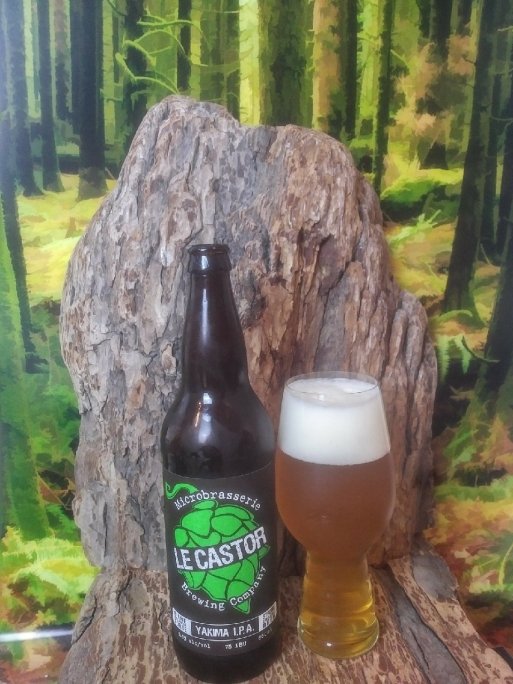 From Stanley Park Brewery in Delta comes their “WinterGlow IPA” an India Pale Ale with mandarin orange.  The beer pours an golden colour with a white head.  The aroma consists of floral hops, mandarin orange and an overall citrus with some mild caramel and biscuit.  The flavour is of mandarin, citrus, citrus rind, citrus, mild caramel, mild biscuit and mild bitterness.  The alcohol content comes in at 6.4% with an IBU of 55.  While this brew may not blow you away it is a well made standard IPA and well worth having in your fridge for when you have company!

check out my post on the Mandarin & Hops Get Fresh launch party. 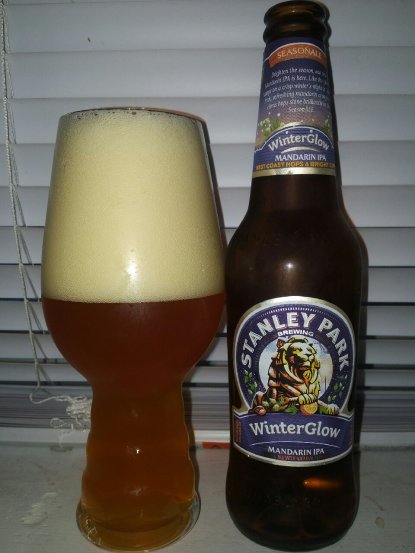 From Hearthstone Brewery in North Vancouver comes their “Kila Belgian Golden Ale”.  This glass of beer was the first official growler fill of the brewery!  The beer poured a golden colour with a white head.  The aroma consists of Belgian yeast, citrus and some grainy malts.  The flavour is of Belgian yeast, citrus, mild apple, sugary, grassy hops, some caramel and mild bitterness.  The alcohol content comes in at 6% with an IBU of 20. 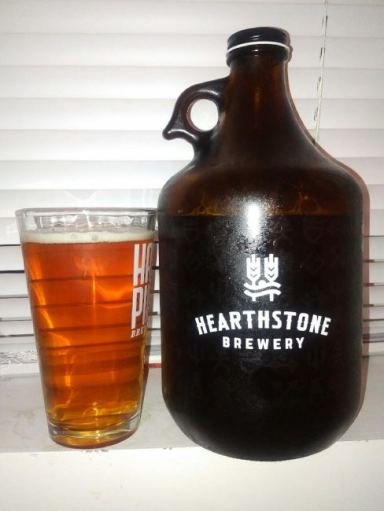 From Yukon Brewing in Whitehorse in the Yukon Territories (Northern Canada 2,400km North of Vancouver BC) comes the “Lead Dog Olde English Ale”.  The beer pours a deep ruby red to brown colour with an off white head.  The aroma consists of roasted malts, dark fruits, molasses, nuts and a hint of chocolate.  The flavour is of roasted malts, chocolate, molasses, dark fruits, earth, nuts and a mild caramel in the finish.  The alcohol content comes in at 7%.  I have only had a very limited amount of Yukon Brewing to this point but this was a very tasty ale and I look forward to trying a bunch more of their beer soon!

How could we survive the Yukon winters without a winter warmer? Well, I guess Yukoners have been doing it for many years before we showed up, but this Olde English Ale has to make the whole thing a little more bearable.

This brew is not for the faint of heart; it doesn’t leap out and bite you (most Lead Dogs are better trained than that), but it will most certainly sneak up and knock you for a loop if given the chance (this character might be more comparable to that of the Malamute and Husky!).  Brewed to be high test, 7% alcohol by volume, the beer nonetheless drinks very smooth; the product of a careful blend of six different malts, and 2 months of aging after fermentation. The dark chocolate appearance is reminiscent of a porter, and the slightly darkened creamy head tops the look. But the first sip lets you know that this beer can be consumed, in quantity if desired (or required?), without leading to an overly full gullet.  Intricate malt flavours predominate, with a medium mouth-feel and a very light bitter. This ale promises to take the chill off after running the team in the crisp January nights. 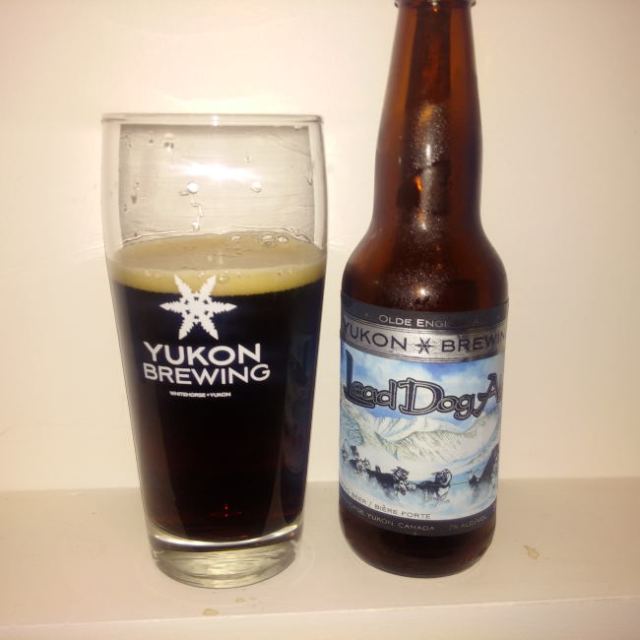