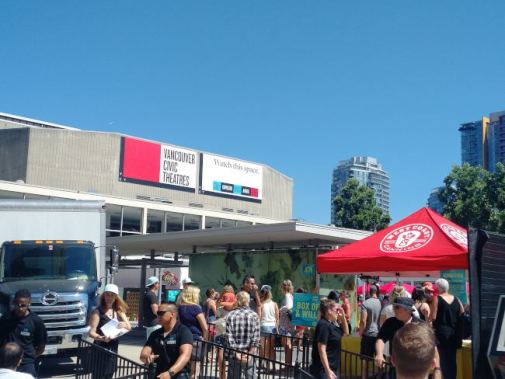 With canned beer being all the rage these days it only made sense that canned craft beer would get its own festival.  The Queen Elizabeth Theatre Plaza made for a great location for a beer fest in the heart of downtown near transit and again in the middle of the forest of towers.

Trying to help the environment the festival decided to use plastic cups made of compostable material unlike the other beer fests that have non-recyclable glassware.  Just like the glassware here the can locally is much more environmentally friendly as it is far easier to recycle than glass.  It is especially true as most glass bottles locally in British Columbia are crushed each time they are used to be melted down and remade into bottles.

This festival was a ton of fun especially on this hot sunny summer day (one that seems to be rare this year).  I look forward to what this beer festival brings next year as they will have one more year to plan and learn from this year.

Here are some full sized photos.