From Spinnakers Gastro Brewpub in Victoria BC comes the “Hummingbird Hop Saison”.  The beer pours a golden colour with a good amount of haze and a white head.  The aroma consists of wheat, yeast, citrus and grassy hops.  The flavour is of wheat, yeast, citrus rind, citrus, pepper, maybe a little astringent, bitterness with a very dry finish.  The alcohol content comes in at 5.5% with an IBU of 39.  This is definitely more bitter than your average saison but it is pretty darn tasty.

Commercial Description:  A West Coast take on a classic style. Brewed with Pilsner malt and oats this medium bodied beer balances the spicy characteristics of a saison with a pleasant bitterness an citrus note thanks to a blended, new world dry hop addition. The refreshingly dry finish will have you humming for more! 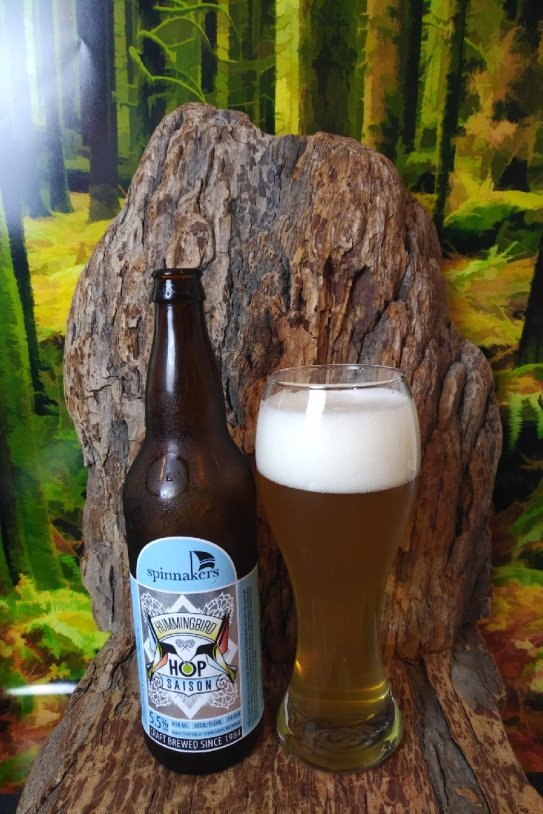 From Strange Fellows Brewing Company in East Vancouver comes their “Bayard Farmhouse Saison”.  Check out the tasting panel I was part of for this beer at Whats Brewing magazine.  The beer pours a golden colour with a white head with some retention.  The aroma consists of citrus, orange, pepper and a citrus find in the finish.  The flavour is of lots of citrus and tons of orange rind, pepper, herbal notes, crackery malts and a grassy and mild bitter finish.  The alcohol content comes in at 5.5% with an IBU of 25.  I enjoyed this beer but I found the citrus rind a little strong for my liking as it took on a bit of an odd bitterness.

Commercial Description:  He’s back and better than ever! – Hero of many a legend, Bayard the horse perpetually outwits any attempt to control him & fearlessly blazes his own path. He symbolizes the free spirit not to be tamed. Wild by nature, this Saison is the happenstance of unique yeasts & bottle-conditioning, & is just the thing for celebrating the things we cannot control. 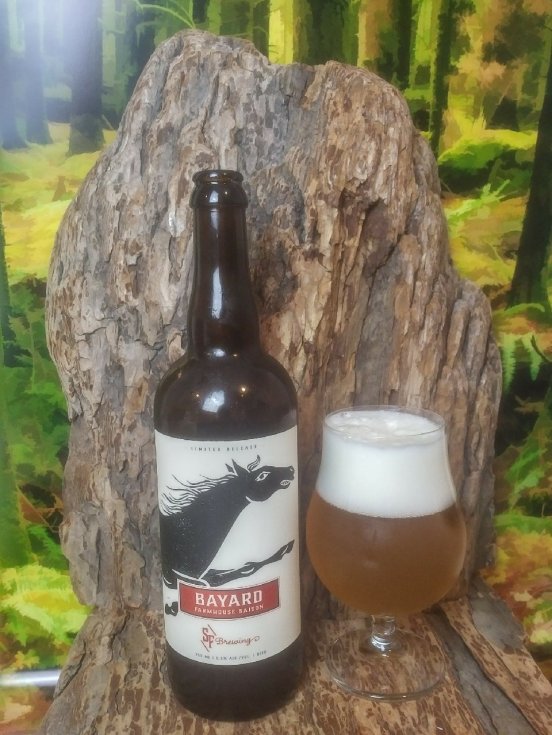 From Steel Toad Brewpub in Vancouver comes their “Patio Saison”.  The beer pours a cloudy orange colour with a white head.  The aroma consists of peppery notes, lemon and yeast.  The flavour is of pepper, spice, yeast, citrus, citrus rind with low bitterness levels.  This beer is not super dry but it is also not overly sweet.  The alcohol content comes in at 5% with an IBU of 25.  Personally this is exactly what I am looking for in a good saison.  you can pick up a growler fill right now at the brew pub.

Commercial Description:  Citrus and pepper from the farmhouse ale yeast used in this beer dominate the palate.  Unlike the traditional ultra dry beers typical of the saison style, this beer is brewed with a healthy quantity of flaked oats to give it a fuller body.  This allows a lower alcohol content that makes this a perfect beer for sessions on the patio.

From Dunham Quebec’s Brasserie Dunham comes their “Saison Rustique”.  The beer pours a straw yellow with a white head and some sediment.  The aroma consists of wheat, spices, citrus, yeast and floral hops.  The flavour is of wheat, spices, resin, mild citrus, lots of citrus rind and bitterness.  The alcohol content comes in at 6% with an IBU of 38.  Not my favourite Saison but it is good example of the style.

From Bush Pilot Brewing an Ontario Gypsy brewery (brewed out of Nickel Brook in Burlington) comes their “Pengo Pally Saison” a beer brewed with Arctic Herbs.  The beer pours a hazy yellow colour with an off white head.  The aroma consists of citrus, yeast, grain, wheat and spices.  The flavour is of citrus, almost tropical fruit, yeast, spices, grain, wheat, sweetness and an almost herbal, flowery finish.  The alcohol content comes in at 6.5%.  This is a an enjoyable saison made by some great Gypsy Brewers.

Commercial Description: Our third bottled release is a beer inspired by legendary Inuit pilot Johnny May. “Pengo Pally” means “I miss you” in the Inuktitut language and this message (in English and Inuktitut) was stencilled on the fuselage of Johnny May’s De Havilland Beaver, as a personal note to his wife Louisa.   Johnny May, was born in 1947 in Kangiqsualujjuaq to Bob Martin May of Manitoba and an Inuk mother named Nancy. Johnny decided to become a pilot when his was six years old, during a flight to his father’s fishing camp when the pilot let Johnny briefly take the controls. Right on the spot, little Johnny knew he wanted to fly for a living. He flew his first solo flight at age 16 and has since embarked on a career that spanned well over five decades.  For most of his career, Johnny May flew in areas where topographical maps didn’t exist, and where the conditions were hostile and filled with danger. It was a vast and uncharted frontier where he landed on tundra or ice, depending on the time of year and the weather.   You can learn a lot more about Johnny May and his adventures by viewing a full feature documentary called “The Wings of Johnny May” which is available for download at the National Film Board.  This film not only depicts Johnny’s adventures, it brings out so much more… the harsh beauty of the Nunavik territory, history of the the Inuit people going through dramatic“ends of the world” events such as the arrival of the snowmobiles which lead to a change from a traditional to a more sedentary lifestyle and more recently, the dramatic effects of climate change on the Arctic ecosystem.  Interestingly, despite ample stories and adventures, the makers of the film said it was difficult to convince the very modest Johnny May to agree to a film about his life.  We are eternally thankful to this humble and brave man for letting us tell his story.   The Arctic herbs for this brew were hand picked in the Nunavik region. After obtaining a small sample batch of several herbs (Labrador, Small Labrador, Crowberry, Ground Juniper and Cloudberry, we experimented with different combinations and ratios. In the end, we settled on three herbs: Labrador tea (Rhododendron Groenlandicum), Small Labrador tea (Rhododendron Tomentosum) and Crowberry leaves (Empetrum Nigrum).  Our long-time collaborator, brewmaster Ryan Morrow brewed a balanced yet complex saison-style beer infused with these exotic herbs. Sip Pengo Pally on its own, or with  a nice summery meal of cedar-planked salmon, served over wild rice or mushroom risotto and steamed fiddle heads.  We sincerely hope you will enjoy both the beer and the story behind it. Cheers!