On February 25th, 2017 UnTapped Craft Imports and Steel Toad Brewpub in Vancouver hosted the Soirée Dieu Du Ciel.  When you hold a party with this epic Quebec brewery and the master brewer Jean Francois in attendance you know you are in for a treat.

The $40 ticket got you entry into the event between 2pm and 5pm and that included a commemorative glass and 4 beer tokens.  The real star of the show was the rare beer that have not been seen in British Columbia as of yet.  These beers included the following:

This was the ultimate introduction to the beers of Dieu Du Ciel!  I have never had a bad beer from this brewery but these are the crème de la crème from them.  Why not get to know a brewery with their absolute bests?

With great events comes great people usually.  Here are my shots as well as some from Whats Brewing and Vine & Hops Wine and Craft Beer Tours.  It was great to meet Jean Francois the Master Brewer and chat with him about beer. 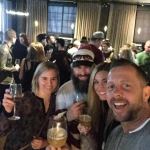 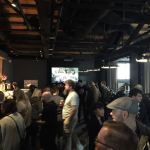 If you are not familiar with this brewery yet it is time to get familiar.  Their beer is available at liquor stores on the West Coast and well worth picking up.  This is truly one of the best breweries in Canada.

Not only is Steel Toad Brewpub hosting a great event with the Soirée Dieu Du Ciel that will bring the founder and master brewer Jean Francois Gravel to Vancouver to discuss his beer but they will be putting some rare beers on tap that have never been seen in this province.

The event Runs from 2pm to 5pm on Saturday February 25th, 2017 and tickets go for $40.  The ticket includes a commemorative glass and 4 beer tokens.

Down to brass tax.  Here is the list of 10 of 12 beers on tap and the three beers in bottles.

Purchase your ticket here with Eventbrite.