From Field House Brewing in Abbotsford comes their “Hazy White IPA”.  The beer pours a hazy orange colour with a white head.  The aroma consisted of orange and general citrus notes but juicy in general with wheat hints.  The flavour is of orange, mild tropical fruits, citrus rind, spices, wheat, mild bitterness and some yeast but not super juicy overall.  The alcohol content comes in at 7% with 30 IBU.  While not super juicy this is a really enjoyable hazy IPA.

Commercial Description:  This juicy wheat beer was infused with the freshly squeezed juice and zest of hundreds of lemons and oranges during multiple stages of the brewing process. Adding hops, juice and coriander during fermentation gives us the extra flavour and hazy appearance that makes this white IPA so luscious.

From Stone Brewing in Escondido California comes their “Xocoveza” an Imperial Stout inspired by Mexican Hot Chocolate.  The beer pours a deep black colour with a brown head.  The aroma consists of milk chocolate, cinnamon, vanilla, coffee, spices and some sweetness.  The flavour is of milk chocolate, toffee, coffee, cinnamon, roasted malts, spices and some sweetness.   The alcohol content comes in at 8.1% with an IBU of 50.  This is my first every chance to try this beer and I really liked it.  I had once smelled it as a bottle jumped out of my car and smashed on the ground.   That was a sad day indeed!

Commercial Description:  There’s nothing like making a beer so beloved that people feel compelled to campaign for its return. So, in the spirit of the holiday season, we are very pleased to give our fans the number one item on their wish lists. As illustrated by the avalanche of social media requests, that is Stone Xocoveza, an insanely delicious take on Mexican hot chocolate brewed with cocoa, coffee, pasilla peppers, vanilla, cinnamon and nutmeg. First brewed in 2014 with San Diego homebrewer Chris Banker after his recipe won our annual homebrew competition, this imperial stout is layered with smooth roastiness, semisweet chocolate and a touch of spice. Thanks entirely to you, this creamy, mocha stout has gone from initially being a one-time offering to a yearly tradition. Happy holidays from all of us to all of you…and feel free to continue enjoying it long into the spring and summer, as this gem will age beautifully and is definitely not exclusive to the winter season!

For food and cigar pairings head to Stone Brewing’s site.

From Moody Ales out of Port Moody comes their “Belgian Golden Strong”.  The beer pours a orange colour with a white head.  The aroma consists of bubblegum, banana, fruity notes and a sweetness in the finish.  The flavour is of bubblegum, banana, caramel, candi sugar, mild bitterness, spices and Belgian yeast. The alcohol content comes in at 8.5% with an IBU of 28.  This is a tasty Belgian style beer and a worthy addition to the Moody Ales small batch series.

From Steamworks Brewing in Burnaby BC in collaboration with Blasted Church Vineyards in Okanagan Falls comes their “Sanctuary” a Saison with Gewurztraminer Grape Must.  The beer pours a cloudy yellow colour with a white head.  The aroma consists of citrus, yeast, spices, Gewurztraminer Grape and wheat.  The flavour is of lemony citrus, spices, wheat, yeast funk, mild Gewurztraminer Grape and pith.  The alcohol content comes in at 7.5%.  This is an absolutely delicious blend of both beer and wine.  Make sure to rush out and buy your bottles before it sells out.

Commercial Description:  Trying to decide between a glass of wine or pint of beer? Now you can have both, with the release of “SANCTUARY”; the heavenly new collaboration beer from Steamworks Brewing Co. and Blasted Church Vineyards. Sanctuary is a bottle conditioned Saison featuring Gewürztraminer grape must and is a departure from the ordinary for both producers.  The making of the beer has been a true labour of love for the brewers and vintners involved. The process started with Blasted Church pressing fresh Gewürztraminer grape must from their Okanagan Valley fall 2017 harvest. The must was then rushed to Steamworks brewery and added during fermentation within 24 hours. The beer was then bottle conditioned for over 2 months in a special facility kept at an optimal temperature.  All of this effort has led to a truly unique and spectacular flavour profile. Subtle grape and fruit notes give way to an effervescent mouthfeel and dry finish with a floral yet mildly spicy saison character. 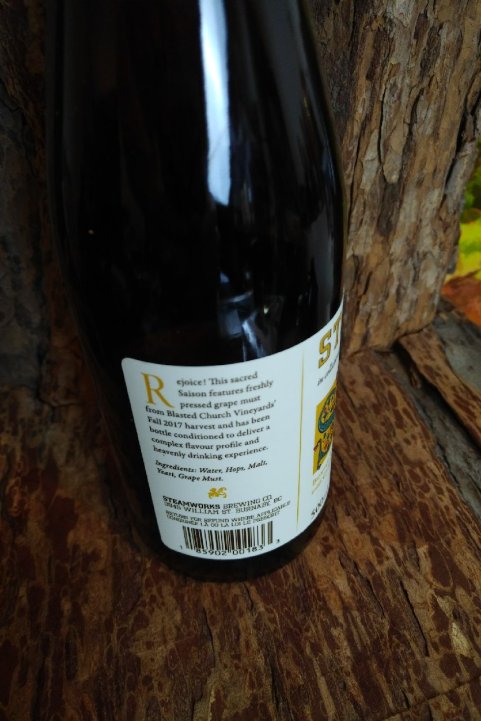 From Britannia Brewing Company in the Richmond with a tasting room in Steveston Village comes their “Sirens Chai Saison”. The beer poured a copper orange with a white head. The aroma consists of chai tea, orange, anise, spices and yeast. The flavour is of chai tea, mild funk, anise, spices, orange with a saison yeast finish. The alcohol content comes in at 5.7% with an IBU of 22. I am not a huge tea fan but this one was quite ewnjoyable.

Commercial Description:  The Sirens call to lure you into this refreshing and effervescent farmhouse ale.  Kettling a local chai tea blend of rooibos, orange, star anise, clove and pepper all adding up to give off a unique spice aroma that compliments our Belgian yeast.