The tasting room had not gone through much of a change at Deep Cove Brewers and Distillers since they opened up in August 2013.  Things have now changed in a big way though.

When you arrive at the brewery there is one glaring and obvious change to the right hand side of the doors.  They now have a patio out front!  One of these days the city of Vancouver will get their heads out of their buts and allow this like North Vancouver has.  If it was a nicer day it would be great to stand out at one of the barrels have enjoy a pint or two. 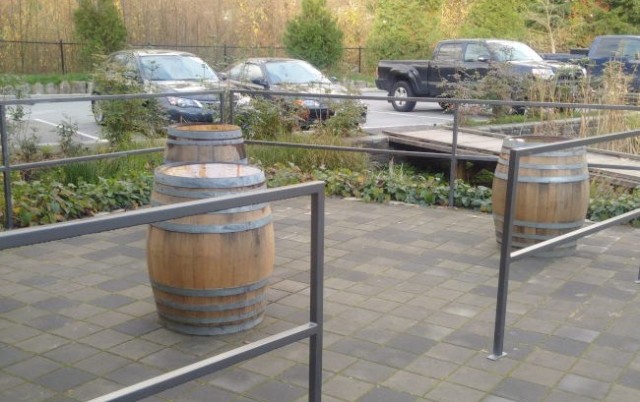 Gone are the long and seemingly breakable glass top tables and in are wood top tables and way more of them. This change has come about because they have finally received their lounge license.  The District of North Vancouver thought long and hard about this license due to the fact they are a brewery and a distillery and they had never licensed one like this.  With this change though you can now head over to Deep Cove Brewers and Distillers and enjoy more than one single 12 oz glass of beer.  Not only can the beer flow from the taps more freely but they now also have a full cocktail menu for spirits lovers to enjoy!  The changes didn’t stop there though as they also put in a small kitchen and have a hot food menu so you can enjoy some food with your beer or spirits.  They also added 4 more washrooms so they have 5 now to help with the increased consumption of alcohol. 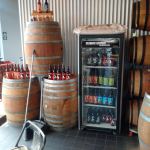 The changes still do not change there as their beer will also be available in can very soon.  With the launch of a line of canned beers they are re-branding all of their beers and even tweaking a few of the original recipes.  Don’t just expect the same old beers in their cans though as they have some new concoctions ready to share with BC!

Make sure to head over and check out the changes and while you are at it have a pint and fill a growler (yeah yeah or have a cocktail or buy a bottle of spirits also).  Just make sure to check out their hours of operation as they have changed.

here are my full sized photos.