Mission Springs Brewing out of Mission BC have been quietly building up a brand new series of beers.  This series of beer is called the Stave Lake – Lost Barrel Series and the first beer in the series is a “Barrel Aged Scotch Ale”.  A portion of this beer was aged for 10 months in French Oak Barrels while another portion was aged in a freshly drained Okanagan Cabernet Sauvignon barrel for 2 weeks.  Large portions of both barrels were then blended with fresh stainless steel fermented scotch ale to create this beer.  Only 750 bombers were made and are hand numbered with this bottle being number 673.  The beer pours a deep brown colour with hints of ruby red under light and an off white head.  The aroma consist of roasted malts, peat, fruit, oak and a hint of Cabernet Sauvignon.  The flavour is of roasted malts, earth, caramel, toffee, dark fruits, Cabernet Sauvignon, maybe some cherries, oak and a sweet finish.  This is a very complex beer!  The alcohol content comes in at 8% alcohol.  I will probably have to try and hunt some more of this beer down as it is fantastic and only having one bottle to cellar would be awful!

Commercial Description from Head Brewer Kevin Winter:  We took a French Oak barrel and put Scotch Ale to sleep for 10 months. The Ale took on a complex oaky and soft silk-like spirit form. The second barrel had been drained of the previous tenant, Cabernet Sauvignon, the day before in the Okanagan and sent to us the following morning where we inoculated it immediately with our Scotch Ale for a short 2 week nap. It awoke with a massive red wine hangover and a gorgeous bouquet. We took the very best amounts of the two alongside fresh stainless steel fermented Scotch Ale to round it all together, and the result is what’s here in the bottle. A unique expression of barrel aging Ale in French Oak Red Wine Barrels. 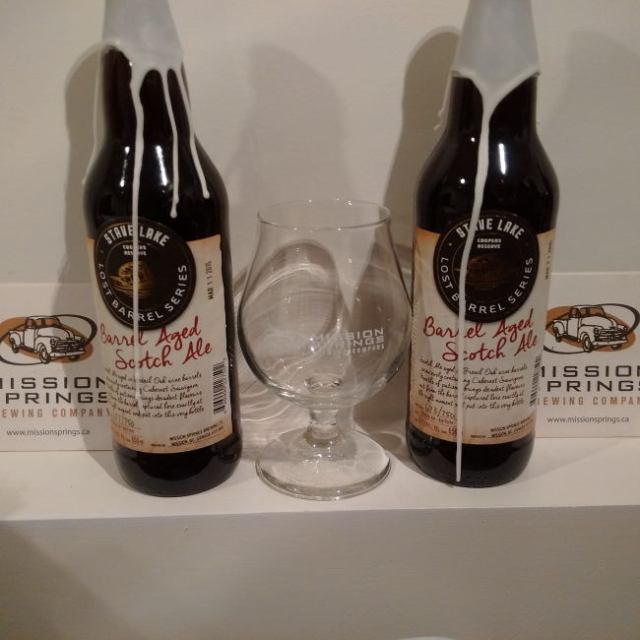 If you live in British Columbia you are likely to have seen this symbol around town.

Recently Red Dragon Skateboarding (Red Dragon Apparel) out of Vancouver teamed up with Dead Frog Brewery in Aldergrove to create a new and exciting beer called the “Red Dragon Imperial Red Ale”.  The beer pours a cloudy brown colour with a tan head.  The aroma consists of passion fruit and an overall tropical fruit tone that overpowers everything else.  The flavour is of Passion Fruit and an overall tropical fruit hit with citrus, pine, hops bitterness and a sweet finish.  The alcohol content comes in at 8% with an IBU of 50.  Not only is the Label really cool (And will also be available on RDS t-shirts soon from my understanding) but the beer is also very tasty!  Its a big beer that holds up to a big skateboarding brand like RDS in BC.

Commercial Description:  This is a monstrous dark red ale with massive helpings of hops and malts.  A robust & rich malt base is perfectly balanced with a tropical citrus flavour & aroma provided by hearty helpings of citra dry hopping.

Recommended glass as per brewery:  Hollowed out skull of your enemies.  For this beer I stuck a pint glass though.

From Calgary Alberta’s Big Rock Brewery comes their new Limited Release the “Cuvee Bru 2013 Druivenbier” a fruit beer using grapes.  Every bottle is numbered and mine was 3258 out of 5300 made.  The beer pours a copper colour with a white head and a champagne like carbonation.  The aroma consists of yeast, grapes, citrus, grainy malts  some caramel and an overall sweetness.  The flavour is of grapes, citrus, yeast, malts, mild caramel and a sweet finish.  The alcohol content comes in at 6%.  This beer is a great marriage between an ale, wine and champagne.  This is quite tasty!

Commercial Description:  Balanced like a luminous bubble upon the delicate wire betwixt the grape and grain, Big Rock’s effervescent new experiment will book your taste buds on a glamorous cruise into exciting new waters. Legend tells of a Belgian brewer who, in one of those magical moments when luck fuses gleefully with genius, blended the gentle sweet snap of grape with the robust sensuousness of a young ale. Big Rock has captured that golden moment of eureka with its exciting new Druivenbier – Flemish for ‘grape beer’. Glistening Pinot Gris grapes have been plucked from the warm bosom of Therapy Vineyards on the Naramata Bench near Penticton, BC. These grapes were then introduced to a sophisticated blend of three of Big Rock’s finest malts. This is a true Druivenbier – rarely seen in North America, and uncompromisingly elegant to the last puckish bubble. 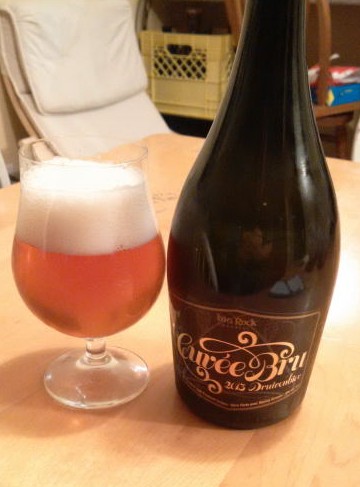