On January 30th, 2016 (Saturday) Central City Brewing held their annual Winter Cask Festival.  This is probably the marquee cask event in BC and I was happy to once again attend.

This year the festival brought us 40 casks from breweries only found in British Columbia.  This years ticket got you a branded sample glass with three samples tokens.  More tokens could be purchased at the front desk.  Like years past many of the casks swung to the Imperial side of things which makes sense as most winter beers are higher in alcohol.

Like I mentioned before this is one of the best if not best Cask events in the entire province every year and it was not different this time.  The beer was great and the people attending were awesome.  I had great conversations that paired amazingly with the beer I was drinking.  I wish more places in BC would hold pure cask events to this scale.

My favourite beers of the night were a tie between two beers once again.

If you have never attended a cask festival or one of Central City Brewing’s amazing cask festivals then you need to change it up and attend.  Not only do you try great been but you will meet many new people that are really into Craft Beer.

Here are my full sized photos.

After missing last years Great Canadian Beer Festival it looked like a good time to reacquaint myself with the largest Beer Festival on Vancouver Island (and one of the largest in BC).   Like every year the festival was a two day event with a Friday that ran from 3pm-8pm and the Saturday Noon-5pm and was held at the Royal Athletic Park in Victoria.  Much like last time I was not able to make it out to the Friday event and only the Saturday because of work and bad/late planning on my part.  Tickets ran at $40 per day and you got a pamphlet with all of the breweries and beers available and a beer glass.  Beer tokens came in at a fairly average BC price of $1.5 which got you a 4oz pour of beer.

This years festival has reverted back to Canadian only Breweries with the vast majority being from British Columbia.  I personally like to bring in American breweries because its a good way to compare our brews to some of the most renowned in the world (but that’s just me).  There were still a ton of breweries at the festival with a total of 62.

The breweries in attendance:

With a selection of breweries as far north of Victoria as a 2,490km drive and as far East as 4,805km away this festival did a good job of bringing Canadian breweries out to share their beer!  In previous years I kept a log of the beers that I was enjoying but this year I decided against it.  I did take many photos of the beer I was enjoying but not all of them as I would hold up the line while doing it.

Once again the costumes were out in full force as well as the entertainment.  There were lots of familiar faces all around but there were so many people I knew were there but missed. This event is planned and executed very well and is a ton of fun but I found that there might have been to many people.  Some of the breweries had lines that you would be lucky if they only took you 10-15 minutes to get a beer sample.  Fuggles & Warlock Craftworks beat this with a line so long that I didn’t even say hi to the guys at the booth it stretched so long!  I hear the Friday event was much less crowded but I did not get to check that night out.

Overall I had an epic time and I look forward to what next year has to offer!

On October 19th, 2013 the BC Beer Awards 2013 / Cask Festival was held at the Croatian Cultural Centre in Vancouver BC.  The event was a partnership of BC Craft Beer Month, BC Beer Awards and Camra BC.  Like every year this event was hosted to celebrate all the amazing Craft Beer being produced in British Columbia.  This was the fourth annual event and was a big step up on last years event (very polished).    The Awards ran from 1 to 6 PM.

I would like to thank the following people and groups.

I was not going to be able to go to the event this year but Lundy made it happen!  It was really fun to stand of the other side of the booth this year and see what it is like to be a volunteer.  Being on the other side of the booth I was able to connect with so many people and find out what they loved about the beer at the event.  I was also able to get recommendations on what beer to try when I was able to check out some samples.  At the Booth we sold Beautiful Brewers of BC Calendars as well as BC Craft Beer Month Shirts.  We also Poured the BC Craft Beer Month Collaboration Beer the “Spruce Tip Stout” a Brewery Creek District collaboration brewed by Main Street, 33 Acres, R&B, Red Truck and Brassneck Brewing.

I was able to get a break from the booth before the awards to sample some beer and visit with all my great beer friends.  I tried samples from a few breweries including Central City, Bridge, Driftwood, Granville Island, Howe Sound, Persephone, Parallel 49, Tree Brewing, Yaletown.  I don’t think I could pick a favorite beer at the event but I can say I was super excited to sample Persephone Brewing Companies beer and was even more excited about it after tasting it!

Around 3pm the awards started at the main stage.  The presenter was Stephen Quinn of CBC radio.  He was a great host and added so great bits of info on beer styles for the less knowledgeable and made a few good jokes.  Well lets waste no more time and let you know who won all the awards this year!

Because I took a ton of time taking photos during the awards I headed back to the the BC Craft Beer month booth and relieved the other crew for the rest of the show.  There were lots of people to serve and chat with and we ended up selling a bunch of Beautiful Brewers Of BC Calendars as well as a bunch of BC Craft Beer Month Shirts.  I could tell from everyone at the event that they had a ton of fun and enjoyed all the beer being served.  I look forward to next years event and look forward to which new breweries win next year!  I can’t wait until the next time I can Volunteer at a beer event in the future!  Hint Hint! 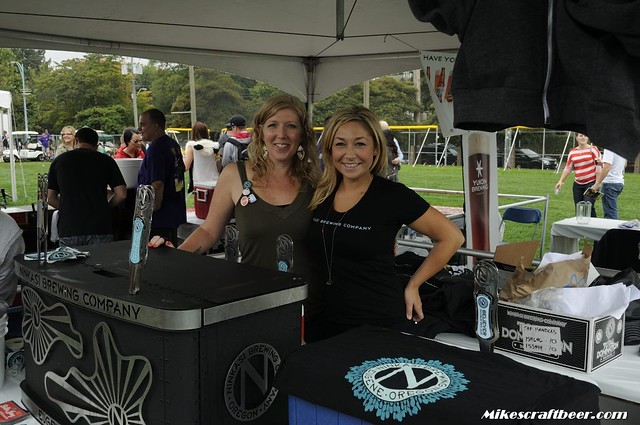