Red Barn pours a deep copper with little carbonation showing.  The head is off white and thick, though it dissipates quickly.

The nose is full of astringent hay notes and grassiness.  The malt underneath adds a nice, balancing caramel sweetness to the aromas and it plays nicely with the grapefruit hop notes at the end of the nose.

Surprisingly malty for an IPA the hops are still foremost on the tongue.  An herbaceous bitterness leads over top of a caramel backbone from the malt.  The bitterness holds for a long time on the finish while grassy notes come out around the middle of the sip.  The finish is a bit boozy with good alcohol warmth.

Overall the fresh hop notes are well displayed without sacrificing balance and drinkability.

From Aldergove’s Dead Frog Brewery comes their new “Wet Hopped SMASH” a wet hopped single hop single malt beer.  This beer is a pale ale but I mistakenly poured it into an IPA glass.  The beer pours a golden colour with a while head.  The aroma consists of grain, tropical fruits and some earth.  The flavour is of lemon, tropical fruits, sweetness, grain, earth and some hop oils.  The alcohol content comes in at 5.8%.  Although not a complex beer due to only one hop and one malt used it is a pretty nice way to train your pallet on flavour and aroma.

From Persephone Brewing Company out of Gibsons BC comes their “Harvest IPA” a beer that is wet hopped with their own hops gown on site.  These hops are only one year old and most hops do not really achieve the best oils until a few years in.  Persephone Brewing took a huge gamble with wet hopping this beer with their young hops.  The beer pours a deep amber colour with a white head.  The aroma consists of biscuit malts and floral/earthy hops.  The flavour is of earthy hops with a decent hops bitterness, resin, citrus, but the real star of the show is the caramel and biscuit malt backbone.  The alcohol content comes in at a very respectable 6.5%.  The real star of this beer are the malts but this is an amazing wet hopped beer and is a very welcome addition to the local landscape.  I have my bets that this beer will be even more amazing for the next few years as the hops plants mature.  If you can still find a bottle then do not hesitate as this is one awesome beer.

Commercial Description:  This light amber IPA is brewed with fresh cascade and centennial hops grown on Persephone’s farm. This beer has an aroma of orange and grapefruit, a subtle citrusy, grassy flavour with a light caramel malt background.

Well it is that time of year again!  Driftwood Brewing out of Victoria BC has brought us their 2014 version of their wet hopped “Sartori Harvest IPA”.  I actually got my two bottles of this years batch a little late as I was over 700km away when it was released on a road trip to the Kottenays.  Luckily I was able to have a few bottles squirreled away for me as like always this beer fly’s off the shelves before most people realize it has even been released.  This year the beer took a huge direction change with the label!  From the nice subtle look of the original to the in your face version this year. 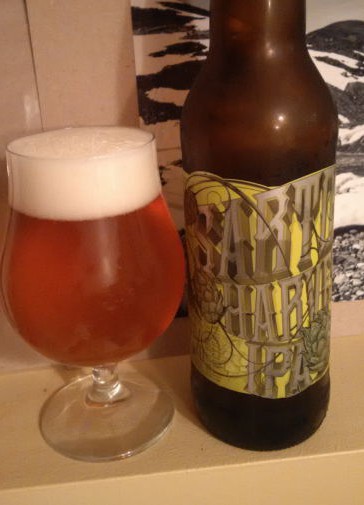 Like every year all hops used in this brew were picked at the Sartori Cedar Ranch in Chilliwack and brought back to Victoria and put into the brew kettle without drying them (most hops is dried and turned into pellets).  This process adds a different flavour than drying out the hops and making pellets.  This also means that the hops oils are much less stable in the beer and the beer should be consumed asap and not held onto.  This beer will have a very short shelf life even to what a normal IPA should have.  As can be guessed by the sudden glut of wet hop or fresh hop beers suddenly on the market the hop harvest just happened very recently!  Fall is an exciting time for hop heads!  This years batch pours a golden colour with a white head.  The aroma consisted of earthy and floral hops, with not much shining through beyond that.  The flavour was of huge earthy hops flavour with pine, hops bitterness, resin and some mild sweetness either from the malts or citrus.  I don’t know if it was just my two bottles or if this was production wide but this years batch was far less balanced with very little malt or fruitiness of any kind coming through.  I found it almost more of a fresher Fat Tug IPA this year.  The alcohol content comes in at 7% this year and I would suspect the IBU would come in similar to the last two years around 75.  To me it seems to be much more than just a label change this year but a entirely new beer.  Don’t get me wrong it is a good beer but it is not what I have come to expect over the last couple of years of Sartori Harvest releases.  I will not be hunting down any more bottles which in a way bums me out as usually I am on a mad hunt for as many bottles as I can find of this brew.  Maybe this is just my experience and I hope that is the case.  Luckily with beer it is all up to the individual person drinking the beer!  Maybe I have just come to expect to much with this release and I do not mean to be a buzz kill Driftwood as I know this is a huge release for your every year but this years version just wasn’t my taste.

So limited its sold out before you can arrive at the store!

From Driftwood brewing in Victoria BC comes the “Sartori Harvest IPA” a wet hopped IPA.  All hops used in this brew were picked at the Sartori Cedar Ranch in Chilliwack and brought back to Victoria and put into the brew kettle without drying them (most hops is dried and turned into pellets).  Being a wet hopped beer the flavour of this beer can and will change year to year and should be consumed as soon as possible as the flavours will die off faster than regular.  This years batch pours a very light golden yellow with a white head.  The aroma consists of floral hops, pine with some earthiness and sweetness and maybe a hint of citrus.  The flavour starts out with a sweet citrus up front then comes in with pine, resin, caramel, malts, earthiness that builds to a nice bitter hops.  This years edition seems very thin but that does not hurt the flavour.  The alcohol content comes in at 7% and the IBU is probably similar to last year but a bit lower than the 75. This bottle was super fresh as it was bottled on September 23th and consumed September 26th! It may taste quite a bit different than last years batch but that does not change the fact it is an amazing beer! I just wish it did not sell out so bloody fast even year!

Commercial Description:  This wet hopped IPA can only be brewed once a year, immediately following the hop harvest, when fresh wet Centennial hops are spirited from the Sartori Cedar Ranch near Chilliwack to our brew kettle in Victoria. Centennial wet hops have a very unique and rich profile that is allowed to shine through the 100% Canadian malt base we brewed with in 2013. A true celebration of the BC hop harvest!

My review of last years batch

Other reviews of this years batch:
Beerscout.wordpress.com 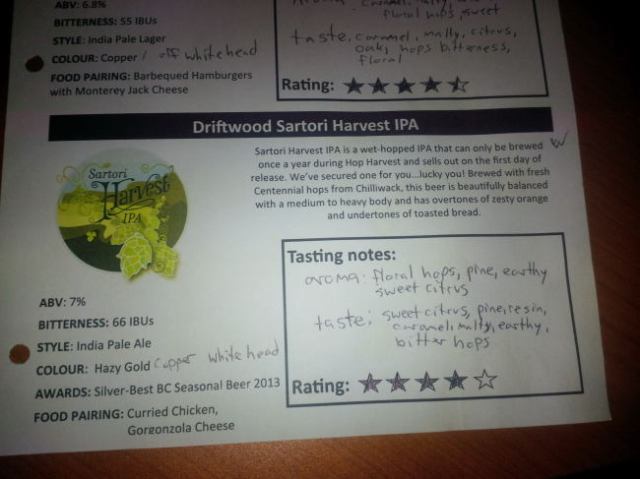