For the third year in a row I was invited to be a judge for the Okanagan Fest-Of-Ale.  Like the last two years the judging took place on day 2 of the festival.  Last year we had 10 Categories to judge from but this year it was up to 14.  The categories were as follows Pilsner/Golden Lager, Pale Ale, Wheat Ale, Belgian Golden/Saison, Amber/Dark Ale, IPA, Dark IPA, Dark Lager, Belgian Strong, Stout/Porter, Blender, Sour, Ciders, Fruit Beer.  With the increase in number of beers being judged this year the organizers of the Fest-Of-Ale invested a few new judges and broke us into three groups.  Each group of judges tasted a third of the beers put in for judging.  Each group picked their top beers beer of each category.  From those they were asked to pick their top two.  These two from each group were brought together to make 6 top beers to choose Best In Show.  From this we sat and sampled each of the six and discussed what one should be the winner.  The following photos of the Judges come from Kim of DogLeg marketing. 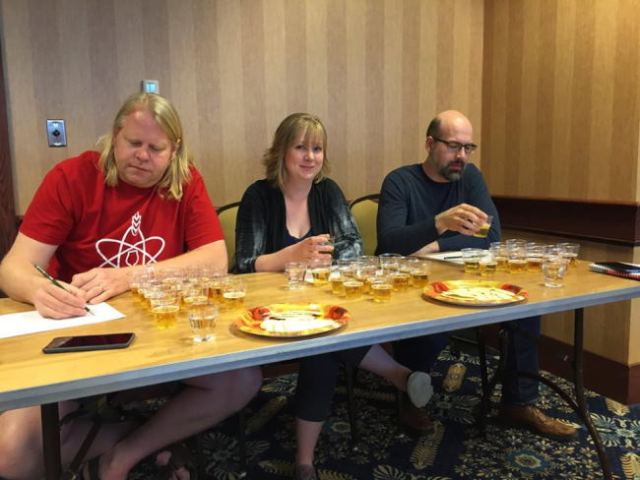 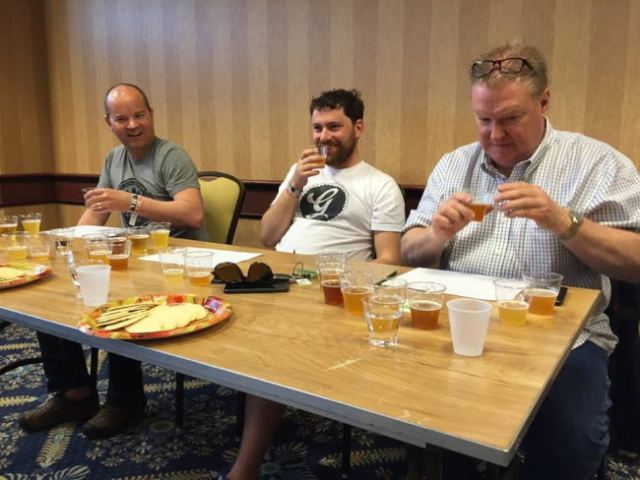 This was a blind tasting like every beer competition.  We used a very simplified score card to decide which beer we though best fit the style and tasted best.  Once again Warren Everton was the Director of Judging.  Each group of three judges tasted their samples individually then came together to discuss their personal favourites.  When we came to a consensus of our top beer in each category the group decided what their top two beers overall were.  For my group there was not a ton of deliberation as we all were fairly similar in or opinions.  When all three groups came together after a short break to taste the top 6 beers and decide what one would be chosen as the Best In Show it actually went pretty well this year.  This year there was much less animosity about what beer should be the winner.  The only real hard discussion we had was should the winning beer be very approachable or should it be our overall favourite. When it came down to it I think we ended up picking the beer that was both our favourite as well as a very approachable beer.  The juding this year started at 10am like normal but it seemed to go a bit quicker than previous years.

Once we had made all of our decisions about best beer of every category and best of show we were given the names of all of the winners we had chosen.

After all the judging was done we had a few group shots taken by Kim of DogLeg Marketing.

After all the judging was finished we were left to our own devices with what was left of the Saturday portion of the Fest-Of-Ale.  The only thing we had to do was be at the main stage for 3pm so that we could be on the stage for the announcement of the winners.  The following photos are taken again by Kim of DogLeg Marketing.