Back in late April I was able to get a look behind the scenes at the brand new but under construction new location for Cannery Brewing in downtown Penticton.  Things were in differing levels of disarray and construction/renovation as can be seen in this old post (Click here).  Things have changed in a big way now that they are open officially.

When I was last here the tasting room was still just a rumor with the demolition still under way.  Things have seriously changed with a gorgeous bar area with lots of seating a patio and a small area for merchandise.  Along with a great selection of their beer they also have some soda and juice for the kids and a cider on tap (cider made by others).  They also offer a great selection of beer food to compliment their beer.  I look forward to the next time I am in Penticton to sample some of their food options with the beer.  Sadly on this trip I was in a rush as I had plans back in Kelowna later in the evening. 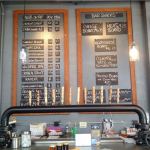 Through the Fest-Of-Ale in Penticton and many beer festivals we have mutually attended I have gotten to know the family that owns Cannery Brewing a little bit and because of this they were more than happy to give me a look around the finished brewery.  If you had ever seen the original location of the brewery you would know that it was cramped (Click here).  The new purpose built location is cavernous with a ton of room for expansion.  This is a good thing as they already have plans for new tanks.  The brewery is segmented with separate rooms for the brewery, packaging room, cooler with tons of room for more tanks and lots of storage for cans and bottles. 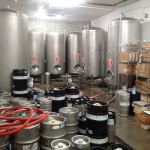 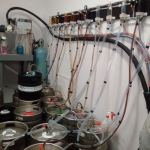 If you find yourself in the Okanagan make sure to head down to Penticton to check out the new Cannery location and the other two breweries in town!