Dead Frog Brewery has released a new mixed 12 case of beer.  The pack consists of 4 different beers with a total of three of each.  There are three standard beers for this pack including Steel Toe Lager, Green Magic IPA and the Rocket Man Pale Ale with a 4th that will rotate.  At this point it is the Atomic Tart Cherry Ale.

Rocket Man Pale Ale has been around for a while now but the other three beers are all pretty new beers to Dead Frog.

Commercial Description: A SMOOTH AND REFRESHING LAGER BREWED WITH PREMIUM INGREDIENTS, MADE FOR ENJOYING AFTER A HARD DAY’S WORK. 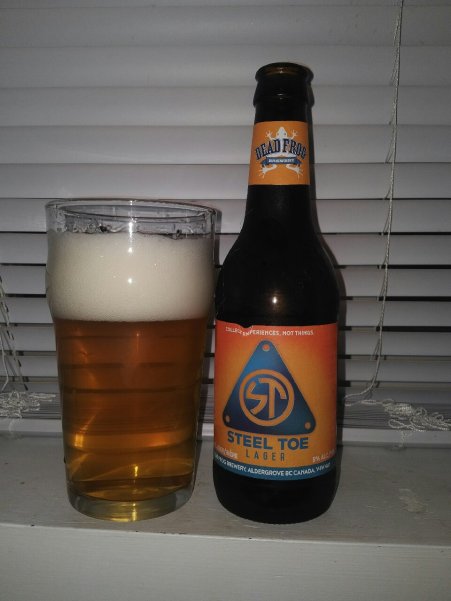 Rocket Man Pale Ale pours a copper colour with a beige head.  The aroma consists of caramel, bready malts and some tropical and citrus.  The flavour is of caramel, citrus, tropical fruit, some earth, mild resin, mild bitterness and a herbal finish.  The alcohol content comes in at 5%.  Rocket Man may have been an ESB in its past life but this is a pale ale through and through.

Green Magic IPA pours a golden colour with an off white head.  The aroma consists of citrus, caramel, biscuit malt and floral hops.  The flavour is of biscuit, caramel, mild resin, earth, medium bitterness, citrus and a herbal finish.  The alcohol content comes in at 6% with an IBU of 60.  If you are looking for a new standard IPA to keep in your fridge this might be your choice.  It is not over the top but has all the malt and hops you will be looking for.

Commercial Description: A WEST COAST IPA WITH JUICY HOP FLAVOURS OF TROPICAL CITRUS AND PINE WITH A CRISP, BALANCED FINISH.

The Atomic Cherry Tart Cherry Ale pours an orange colour with a tan head.  The aroma consists of maraschino cherries and some caramel.  The flavour is of maraschino cherries, bready malts, some earth and bitterness and a very mild tartness in the finish.  The alcohol content comes in at 5% with an IBU of 8.  This is a good tart ale to introduce a new person to the style.  The tartness is mild and there is some sweetness also.  It will not overwhelm the pallet of someone that has never had a tart beer.

If you are like me and don’t really like the 6 pack format this might just be a great pack for you.  Three of each beer is a great sample of each without having to commit to 6 of the same beer.